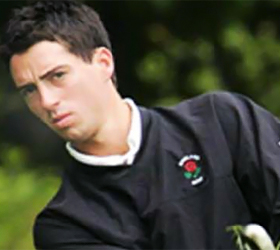 VIENNA: England’s John Parry carded a five under par 67 to grab a one-shot lead after two rounds of the Austrian Open on Friday, but US Open champion, and Ryder Cup star, Graeme McDowell was poised to pounce. The 23-year-old Parry, a former amateur teammate of Rory McIlroy, made five birdies without dropping a shot to reach eight under par for the tournament at the Diamond Country Club in Atzenbrugg. “It’s a bit early to be looking at leaderboards – we’re only in the second round,” said Parry, who graduated from the Challenge Tour last year. “It’s a lead, though, so I’m happy going into the weekend in front. I’d always prefer to be in the lead than not.” But he faces a tough weekend with McDowell as well as Jose Manuel Lara and Pelle Edberg just a shot behind.

McDowell, playing his last event before The Ryder Cup in October, looked to be in great form as he birdied four of his first five holes. He then responded to a bogey at the 17th with another birdie before parring every hole on the way in for a four under 68 and seven under total. “This front nine’s quite tricky and you’ve got to drive the ball unbelievably well to have any chance of making birdies,” said McDowell. “On the back nine it’s a lot more three woods and hybrids off the tees which offers you a few more opportunities and I think the greens are a little flatter as well. “I think I’m two over par for the front nine and nine under par for the back nine overall so I certainly know where I need to make up some shots on the weekend.” – Timesindia

NODMC to ensure transparency in utilization of foreign assistance for flood victims: PM