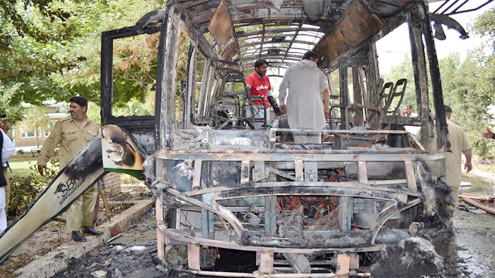 Two violent incidents in Balochistan on Saturday have left people numb with shock. First, Baloch insurgents attacked and destroyed the Ziarat Residency during the night, a building with much history and sentiment attached to it as the place where Quaid-e-Azam Mohammad Ali Jinnah spent the last days of his life.

One security person was killed. Second, the morning bombing of a bus of the Sardar Bahadur Khan Women’s University in Quetta killed 12 students, followed by an armed attack on the Bolan Medical College’s teaching hospital, where 22 injured students had been taken for treatment. This attack and exchange of firing between the attackers and the security forces lasted five hours before the terrorists were finally overcome. In the process, four attackers were killed and one captured alive. Four nurses, the Quetta DCO and four security personnel were killed in this battle.

The Balochistan Liberation Army (BLA) has claimed responsibility for the Ziarat attack, while the Quetta carnage has been claimed by the Lashkar-e-Jhangvi (LeJ). Condemnation of both attacks has flown thick and fast from the top leadership of the country and the ruling PML-N, as well as leaders of other political parties. The Senate passed a unanimous resolution condemning the attacks, particularly the one on the Ziarat Residency. Prime Minister Nawaz Sharif spoke to Balochistan Chief Minister Dr Malik Baloch, urging patience, while Interior Minister Chaudhry Nisar Ali said there would be no dialogue unless the militants accepted the writ of the government.

There has been a tendency in the media coverage of the incidents to lump them in the same basket. This is a mistake. The LeJ is a sectarian outfit, not so long ago responsible for the bombings in Quetta that killed hundreds of Hazara Shias. Its terrorist inclinations are once again on display in its targeting innocent girl students. Its almost simultaneous attack on the hospital shows its merciless and ugly visage. The Ziarat attack on the other hand, grief over a symbol of the Quaid and Pakistani heritage notwithstanding, was a message being delivered by the BLA that it not only did not recognize Pakistani national monuments, it was also a rejection of the hopes residing in nationalists from the province being handed power in the shape of the Dr Malik-led coalition government in Quetta.

Soon after taking office, Dr Malik had stated he would try for a dialogue with the insurgents. There were even reports in the media that he had contacted self-exiled Baloch insurgent leaders abroad for the purpose. The hope that Dr Malik’s induction would somehow lead to a softening of the insurgents’ hardline rejection of the Pakistani state on the basis of their historical and ongoing resentments must now be treated as wishful thinking. Unfortunately, the chances of Dr Malik being able to persuade the insurgents to join talks were negated by a continuation of the ‘kill and dump’ policy before, during, and after the elections.

The two sets of policies, political reconciliation through a moderate Baloch nationalist-led government in Quetta, and the continuing repression at the hands of the security services, particularly the hated Frontier Corps (FC) and its mercenary death squads, clearly are so contradictory as to lend credence to the insurgents’ argument that the new government in Quetta is only the soft face of the same repressive order.

As far as the LeJ is concerned, its evil will not yield to reason. Such fanatics and enemies of humanity need to be dealt with with an iron hand. There is just no other alternative. As to the Baloch nationalist insurgents, the contradictions in the state’s policies, ranging from continuing repression to raising hopes of political reconciliation in the teeth of the former, seems a project inevitably doomed to failure. Balochistan’s nationalist insurgency remains a political issue, lending weight to the argument that a dialogue to resolve the long standing problems of the province is at least a theoretical possibility.

However, for that to have a snowball’s chance in hell, the other side of the policy coin, repressive and murderous measures, will have to be abandoned first. Since there is no sign of that happening anytime soon, it seems the largest, least populated and least developed province of the country is likely to face even more violence and bloodshed. This can only add to the mountain of problems the government of Prime Minister Nawaz Sharif already faces. – DailyTimes