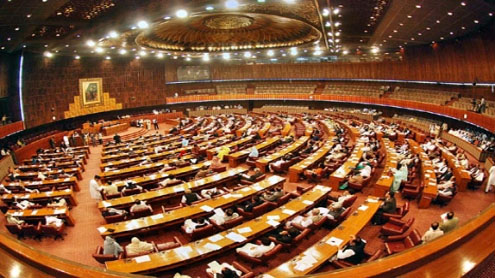 With 301 of the 323 newly elected members of the National Assembly (NA) taking oath on Saturday, 345 members doing the same in the Punjab Assembly and 56 in the Balochistan Assembly, the process of inducting the new members of parliament is complete (the Khyber Pakhtunkhwa and Sindh Assemblies have already done this).

This completion of the first phase of the process of completing parliament sets the seal on the historic transition for the first time in the country’s history from one elected government that completed its term to a new elected government. The elections of May 11, some vacant seats needing to be filled notwithstanding, have by and large been accepted as credible if not always wholly transparent or even fair. Considering the speculations and rumours doing the rounds in the run up to the polls that the elections may not happen at all because of various conspiracy theories, the people and the parliamentarians deserve applause, particularly since the threats of the terrorists failed to dampen the enthusiasm of the electorate.

While many new voters entered the fray, especially those who have only just achieved maturity (a considerable number from all accounts), about 100 new faces or first timers were visible in the 14th NA in its inaugural session. After administering the oath to the MNAs, outgoing Speaker Dr Fehmida Mirza prorogued the house till 11:00 a. m. today, when the elections for Speaker and Deputy Speaker are to be held. In the provinces, three already have decided their chief ministers. Balochistan is the exception, although the meeting of the PML-N and its allies in the Balochistan Assembly being held in Islamabad on Sunday evening was expected to take the final decision.

Prime Minister-in-waiting Nawaz Sharif returned to the NA as a member after a full 14 years, many of them spent cooling his heels in forced exile. His entry and presence were loudly cheered by his supporters in what appeared a festive mood for the PML-N. Earlier, speaking to the Central Parliamentary meeting of the PML-N, Nawaz Sharif sombrely enunciated the priorities for his incoming government. He declared zero tolerance for corruption, raising Rs 550 billion to retire the circular debt in the energy sector and thereby tackle load shedding, dealing with multiple problems but first and foremost the flailing economy that was at the root of terrorism, poverty, unemployment and even the energy crisis. He was thankful for not having had to compromise with any party to form his government, but promised to adhere to the Charter of Democracy he had signed in London in 2006 with slain PPP leader Benazir Bhutto. The meeting nominated Nawaz Sharif unanimously as prime minister through a resolution moved by Chaudhry Nisar.

The phenomenon of multiple seat holders in the National and provincial Assemblies having to surrender their extra seats by June 10 raises the question why our electoral system allows candidates to stand from more than one constituency. Nowhere else is this practice in vogue. Multiple seat victories that have then to be trimmed down to one indicate that the winning candidates were never serious about representing the voters of the surrendered seats, often not even being acquainted with them or their problems.

The incoming government should seriously consider doing away with this anomaly, which will now require new elections on the 28 National and provincial Assembly seats surrendered, in favour of single constituency elections for all candidates. That way, the elected representatives will be better in touch with their constituents and serve them better. And if they perform well, are likely to be re-elected from the same seat as a mark of the confidence of their constituents.

Much of the reportage on the new dispensation reminds us that this is a right-wing government for the next five years (all other things being equal). While Nawaz Sharif’s government is expected to be pro-business (witness the business community’s delight at the PML-N victory), the weight of expectations from the new government can only be met if it focuses on the serious problems of the underprivileged, marginalised and poverty-stricken. Nawaz Sharif should not lose sight of the fact that this is the majority of our people. – DailyTimes

Internet speculation over identity of No.10 secret love affair