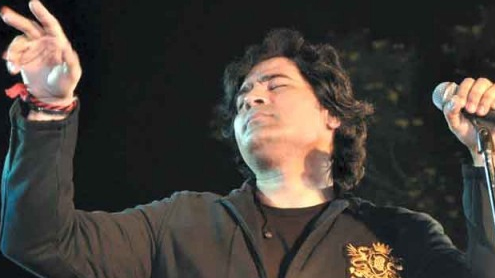 LAHORE: Renowned Pakistani singer Shafqat Amanat Ali Khan, who gained recognition across the border for his remarkable playback vocals, has announced that he will be releasing a new album for his fans very soon. But this time, it will be a digital release (over the internet) and not through CDs.

In conversation with media , Shafqat said that the modern market for music is digital, and that he is frustrated with the issue of CD piracy. “One cannot explain the issue of piracy,” he said. “Why someone illegally uploads or downloads an album is beyond me. It’s been really damaging to the industry,” said Shafqat. “In Pakistan, the government is clearly not focused on the issue of piracy. Record labels really aren’t offering much either,” he added.

Shafqat claimed that his new album, which is yet to be titled, will represent shades of his personality. He added that some of the songs were composed by him when he was still a student in a government college, struggling to become an artist. Other songs on the album are based on more recent experiences. Working in India  “Whenever you hear that you are the most sought-after singer, you feel honoured, especially when you’re working abroad.  You are looked at as an ambassador,” said Shafqat, humbled by the praise he received in India and across the globe. “You have to live in peace and prosperity with your neighbours,” he added.

Despite all the benefits of singing for Bollywood and how attractive it may be, Shafqat said that B-town isn’t completely fulfilling. “(It is) not an answer or solution for a classically-trained singer,” he admitted. He said that when it comes to composing a song for a specific film, a musician is kept on his toes and has boundaries to work within, but added that working on a personal album is imperative.

“Creatively,  you need to do private albums because in order to improve, you have to push yourself,” said Shafqat. “More Pakistani artists are focusing on Bollywood because of the circumstances in the Pakistani music industry. The Indian music industry  keeps you on your toes, and even if you’re a good singer, you have to keep improving or you won’t survive.” A look at the past and future Former lead singer of Pakistani band Fuzon, Shafqat has come a long way since the band’s success and his eventual split. He decided to pursue a career in music as an independent artist when the band was on the rise, leaving his fans surprised.

The band itself had been emblematic of the “Fuzon culture” that had developed in the sub-continent. Now, 47-year-old Shafqat is unapologetic about riding the musical wave independently as a solo artist. “It’s more of a hassle-free life (working independently). You get to work according to your abilities and you can try anything creative and have nothing holding you back,” he said. “When we used to perform (as a band), we would have a limited list. Now, it’s different as the playlist has increased.”

In the near future, Shafqat has planned several releases. For instance, his recordings for “Coke Studio” in Amritsar (which were done years ago) are now being released. His voice will also be used in a film starring actor Ranbir Kapoor. Apart from singing, Shafqat seems to have an undiscovered interest in acting. When asked how he feels about it, he said, “It’s not something I am against, but for the most part I have focused on my musical projects.” -Tribune