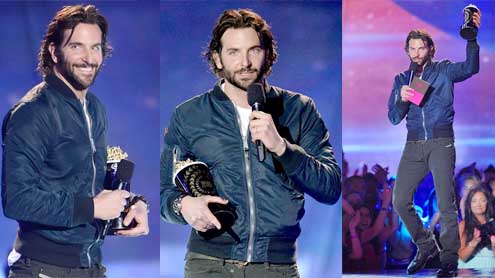 He smiled graciously each time his competitor Daniel Day Lewis swept up the best actor awards at nearly all the major ceremonies earlier this year.

But Bradley Cooper was finally given his moment to shine as he picked up not one, but two, acting gongs at the MTV Movie Awards on Sunday night in Culver City, California.The 38-year-old, who plays a bipolar afflicted man in the David O. Russell hit, won Best Male Performance as well as Best Kiss with co-star Jennifer Lawrence at the irreverent awards show.The actor, who accepted the award from an elegantly dressed Melissa McCarthy, kept his speech short and to the point, graciously thanking his Jennifer and the rest of the Silver Linings cast.

He said the best part about playing the part was getting the chance to travel around the country meeting war veterans, who need help as they transition back into society.Bradley came on-stage a second time after winning for Best Kiss with Jennifer in the romance flick.Jennifer wasn’t at the ceremony, so the actor accepted the award solo, stating, ‘Jen’s not here but she was great to kiss.’Emma Watson, meanwhile, scooped the award for Trailblazer for her work in movies such as Harry Potter and The Perks Of Being A Wallflower.

The actress was introduced by her My Week With Marilyn co-star Eddie Redmayne and Noah co-star Logan Lerman at the event before Jonah Hill paid tribute to her via video.Eddie said: ‘We all fell in love with her as Hermione Granger and since finishing Harry Potter she has dumbfounded us with her brave and fearless choices.’An emotional Emma, 22, admitted she was close to tears following the tributes and urged her fans to always follow their dreams.’I look back at the work I’ve done over the last 14 years and many things come to mind. Most importantly how bad my hair was in the first Harry Potter film.”You have supported me in all of my awkwardness and allowed me to grow into the kind of actress and kind of person I want to be,’ she added.

‘I was the eager beaver in school, the first to put her hand up which is often not cool and I was teased mercilessly but I have learned if you put your heart into something amazing things will happen. ‘I promise to keep making the best work I can for all of you.’Samuel L. Jackson also claimed two awards, for Best WTF Moment with Jamie Foxx in Django Unchained as well as Best Fight prize along with other castmembers for The Avengers.

Samuel and Jamie were presented the award by funnymen Chris Rock and Adam Sandler, whose monologue was mostly bleeped out due to expletives.Will Ferrell wore a three-piece suit covered in dollar bills to accept the Comedic Genius Award from Game of Thrones star Peter Dinklage.’For those of you sitting here tonight who don’t think I’m funny, I’ll be happy to fight you in the parking lot after the show,’ said Will, who is currently at work on Anchorman 2, slated for release later this year.’Here’s the deal. I’m just a simple guy from Irvine, California. I had two basic dreams. – DailyMail