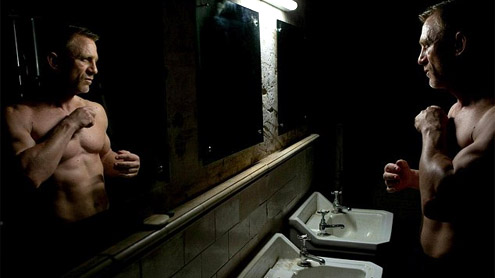 Shooting was delayed two years ago because of funding problems so it’s been a long time coming.

But James Bond enthusiasts will be thrilled to see newly-released stills from the latest movie, Skyfall, especially female fans.Daniel Craig returns as the protagonist and is showing off his buff figure in shots to promote the film.The 44-year-old star flaunts his muscular form as he stands shirtless in front of a mirror.In the gritty image, Craig can be seen prodding at his impressive pecs as he looms over a row of sinks and stares at his reflection.

It is has been four years since the last film in the saga, Quantum of Solace, was released. The motion picture made $586,090,727 at the worldwide box office making it the highest earning Bond movie ever.Skyfall is one of the most hotly anticipated films of 2012 and opens in cinemas nationwide on October 26 in Britain and November 9 in the United States.

American Beauty director Sam Mendes is at the helm and Oscar-winner Javier Bardem stars as villain Raoul Silva while Dame Judi Dench returns as spy chief M.The flick’s synopsis says that Bond’s loyalty to M is tested as her past comes back to haunt her. As MI6 comes under attack, 007 must track down and destroy the threat, no matter how personal the cost.Production was suspended throughout 2010 because of MGM’s financial troubles.They resumed pre-production following MGM’s exit from bankruptcy on 21 December 2010, and in January 2011 the film was officially given a release date. – Dailymail