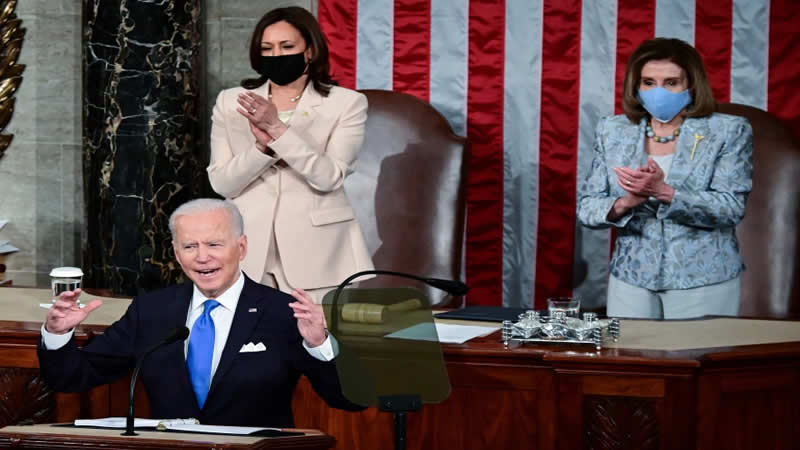 United States President Joe Biden delivered his first address to a joint session of Congress on Wednesday night, telling Americans that the country is “moving forward” again, after the coronavirus pandemic claimed hundreds of thousands of American lives and crippled the country’s economy.

“After just 100 days, I can report to the nation: America is on the move again. Turning peril into possibility. Crisis into opportunity. Setback into strength,” Biden said.

He said that the coronavirus vaccines are being made available to nearly 40,000 pharmacies and over 700 community health centres.

Touting his $1.9 trillion stimulus package for Americans, Biden said that it has helped the country’s economy grow at a rate of more than six percent this year.

The Democratic president also pleaded with the opposition Republican Party to support his sweeping tax plan that would help pay for his $1.8 trillion “American Families Plan”.
Here are the latest updates:

Brenda Lawrence, a Democratic congresswoman from the US state of Michigan said that while it is unusual for a sitting US president to address a half-empty Congress, Joe Biden managed to connect to the ordinary citizens who need to hear his message.

“What we saw tonight was a leader. The electricity that’s usually there in a room for the joint session of Congress, it wasn’t there. But what we saw was a conversation with the elected body of our government,” she told Al Jazeera.

2 hours ago (03:10 GMT)
Alexandria Ocasio-Cortez, a member of the Democratic Party has weighed in on US President Joe Biden’s speech, crediting activists and community organisers for fighting for progressive issues under the new administration.

2 hours ago (03:10 GMT)
Analyst says US will continue to be sharply divided
John Nichols, national correspondent of The Nation magazine, said that while US President Joe Biden delivered a powerful speech, he said that it is unlikely that he will get a lot of Republican support.

“I think the lines are very clearly drawn in this Congress. While President Biden will definitely reach out to Republicans, and while there are some Republicans who will meet with him…but there is a pretty clear divide that has developed now on almost every major vote that comes down.”

2 hours ago (03:04 GMT)
Biden speech welcomed as “bold”
Democrats and civil society have welcomed the president’s speech as “bold”, welcoming his calls to expedite legislation for a fairer economy, and to address gun control and hate crimes.

“Tonight, the president delivered a hopeful report on the great progress we’ve made during his first 100 days in office, and charted an equally hopeful path for a lasting, fair economic recovery after the pandemic.”

“President Biden laid out a bold, ambitious agenda during his speech tonight – including committing to sign into law legislation that would protect our freedom to vote and root out corruption in our politics.

“But if we have any hope of getting it done, we need to first end the filibuster. We cannot let a minority of senators representing an even smaller minority of the population stand in the way of protecting our democracy.”

“We appreciate the President calling on Congress to send to his desk key legislation, including the Protecting the Right to Organize Act, the Paycheck Fairness Act, the COVID-19 Hate Crimes Act, the Equality Act, the reauthorization of the Violence Against Women Act, the For the People Act, and the John Lewis Voting Rights Advancement Act.”

2 hours ago (02:54 GMT)
Scott rebuttal gives indication of Republican strategies
John Nichols, the national affairs correspondent for The Nation and author of the book the Fight for the Soul of the Democratic Party, has been speaking to Al Jazeera.

He says Scott’s rebuttal speech gives an indication of the Republicans’ likely strategy against the Democrats once the next elections roll around, noting how Scott tried to credit Donald Trump with the success of the US vaccine rollout.

Nichols said the problem with that approach is that it is sitting presidents who tend to get all the credit when things go right, even if they also get the blame when policies go wrong.

The only African-American Republican in the US Senate has delivered his party’s rebuttal to US President Joe Biden’s address to a joint session of Congress.

South Carolina Sen Tim Scott said that the US is more divided under the Biden administration while criticising the Democratic president’s response to the pandemic.

Scott also drew a contrast between Biden’s agenda and the Republicans on the issue of race, adding that “America is not a racist country”.

The United States welcomes competition with China, President Joe Biden said, as he stressed that Washignton DC is “not looking for conflict” with Beijing.

Biden said that he had told Chinese President Xi Jinping that he “will defend American interests across the board.”

“America will stand up to unfair trade practices that undercut American workers and industries, like subsidies for state-owned enterprises and the theft of American technologies and intellectual property.

“I also told President Xi that we will maintain a strong military presence in the Indo-Pacific just as we do with NATO in Europe – not to start conflict – but to prevent conflict.

“And, I told him what I’ve said to many world leaders – that America won’t back away from our commitment to human rights and fundamental freedoms.”

02:11 GMT – Biden says US not seeking ‘escalation’ with Russia

US President Joe Biden said that he was not seeking to escalate tensions with his Russia and its leader, Vladirimir Putin, after imposing an array of sanctions against Moscow.

“I made very clear to Putin that we don’t seek escalation but their actions have consequences,” Biden said.

US President Joe Biden has urged Congress to pass legislation that would end the “epidemic of gun violence” in the country.

“I will do everything in my power to protect the American people from this epidemic of gun violence. But it’s time for Congress to act as well.

He pleaded to Senate Republicans to join Democrats “to close loopholes and require background checks to purchase a gun.”

“And we need a ban on assault weapons and high – capacity magazines again. Don’t tell me it can’t be done. We’ve done it before … and it worked.”

US President Joe Biden has declared that “white supremacy is terrorism” and said that it is time to address racism in the US.

“My fellow Americans, we have to come together. To rebuild trust between law enforcement and the people they serve. To root out systemic racism in our criminal justice system.

“And to enact police reform in George Floyd’s name that passed the House already,” he said as he pleaded for Congress to pass the legislation into law by May, the first anniversary of the death of George Floyd, an African-American whose killing by a white police officer triggered protests across the country.

President Joe Biden declared that “the climate crisis” is not just a fight that the US can fight alone, but a “global fight”.

“The United States accounts for less than 15 percent of carbon emissions. The rest of the world accounts for 85 percent.

“That’s why – I kept my commitment to rejoin the Paris Climate Agreement on my first day in office.

“And I kept my commitment to convene a climate summit right here in America, with all of the major economies of the world – from China and Russia to India and the European Union in my first 100 days.

“I wanted the world to see that there is consensus that we are at an inflection point in history.”

President Joe Biden argued in his first speech to Congress on Wednesday that he had restored Americans’ faith in democracy nearly 100 days after he succeeded Donald Trump in office, and was set to unveil a $1.8 trillion spending and tax-credit plan.

He said that the Top 1 percent of country’s wealthiest people should pay their “fair share” in the country’s economy.

“20 million Americans lost their jobs in the pandemic – working- and middle-class Americans. At the same time, the roughly 650 billionaires in America saw their net worth increase by more than $1 trillion.”

He said that the vaccines are being made available to nearly 40,000 pharmacies and over 700 community health centres.