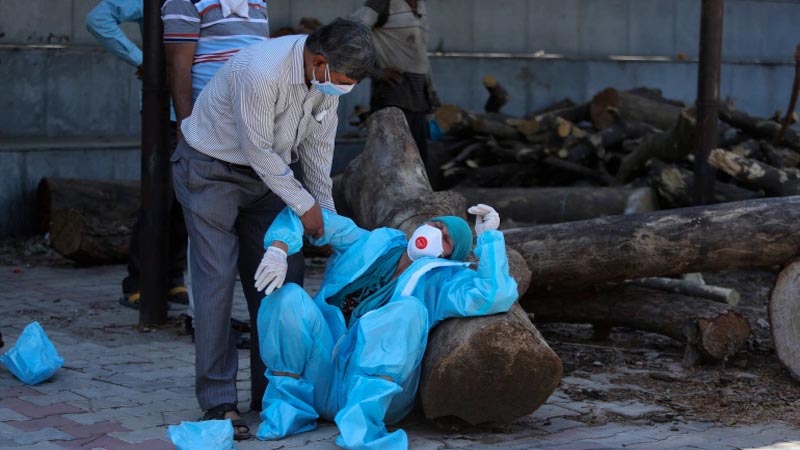 Several countries have promised to rapidly send supplies to help India as the country reels from shortages of oxygen and medicines amid a devastating second wave of the coronavirus.

The United States on Sunday said it was working to immediately deploy to India drug treatments, rapid diagnostic COVID-19 testing kits, ventilators and personal protective equipment and will seek to provide oxygen supplies as well.

The White House said in a statement it had identified sources of raw material urgently needed for India’s manufacture of the Covishield vaccine and will make those available.

The healthcare system has struggled to cope with the huge surge, with reports of severe oxygen and medicine shortages and patients’ families pleading for help on social media.

India’s capital New Delhi, home to 20 million people and the worst-hit city in the country, extended its lockdown by a further week.

New Delhi on Saturday reported just over 24,000 new cases – with more than one-quarter of those tested returning positive results – and a record-high 357 deaths.

“We are in the most grievous challenges our country has faced since the partition of 1947,” Dr Ritesh Malik of Radix Healthcare told Al Jazeera.

“We are seeing a very vulnerable population continuously in search for oxygen, beds, medicines and things even like paracetamol in smaller towns in India,” he added.

Prime Minister Narendra Modi said in a monthly radio address on Sunday that India had been shaken by a “storm” as he called on people to get vaccinated and not “get swayed by any rumour about the vaccines”.

The country has administered almost 141 million vaccine shots so far, but experts say the mass inoculation programme needs to be significantly stepped up in the nation of 1.3 billion people.

There has been growing criticism of Modi’s government over allegations it was caught underprepared ahead of the surge.

Meanwhile, on Sunday, Twitter confirmed it withheld dozens of tweets critical of the crisis after a legal demand from New Delhi.

“If (the content) is determined to be illegal in a particular jurisdiction, but not in violation of the Twitter rules, we may withhold access to the content in India only,” the social media giant said in a statement.

Some tweets included comments, including from regional opposition lawmakers, about the overwhelmed healthcare system.

The IT ministry told AFP news agency it asked Twitter to remove 100 posts, adding that there was “the misuse of social media platforms by certain users to spread fake or misleading information and create panic about the COVID-19 situation in India”.

Oxygen crisis
Some states and territories have imposed curbs on movement and activities, with Indian-administered Kashmir on Saturday announcing a weekend lockdown.

Ambulance sirens echoed through empty streets in the northern city of Lucknow in India’s most populous state, badly hit Uttar Pradesh, during its weekend lockdown.

In New Delhi, there were chaotic scenes outside some hospitals.

“I’ve no one else except my wife and child who I’ve left on the road with an acquaintance,” Sehdev Bhatta, whose wife was lying in the back of an ambulance breathing with the help of an oxygen tank, told Al Jazeera outside Lok Nayak hospital.

“There’s no one to look after us. We aren’t getting a bed and I’ve tried many hospitals,” he added.

The government said on Sunday that more than 500 oxygen-generation plants were to be set up in hospitals. Oxygen supplies were also being bolstered through special trains and airlifts of containers from other countries.