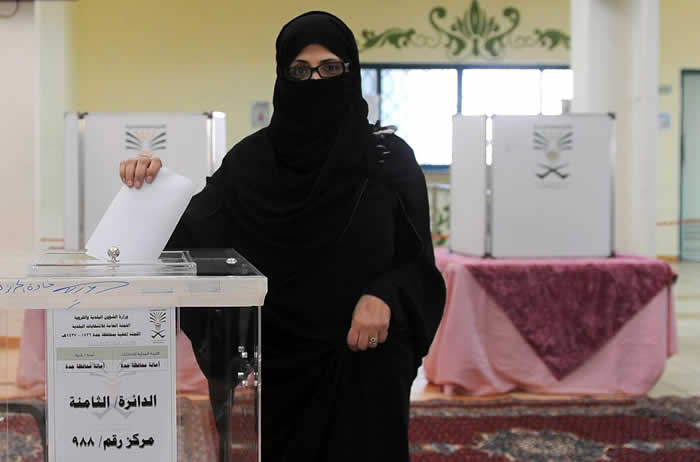 Women have been elected to municipal councils in Saudi Arabia for the first time after a ban on women taking part in elections was lifted.

At least four women were elected, the state-run Saudi Press Agency (SPA) reported. Other news agencies put the number between nine and 17. Women were elected in Mecca, Jawf and Tabuk, SPA said.

The vote is being seen as a landmark in the conservative kingdom. However, the councils have limited powers. Women also won in several other regions in the country, including Jeddah and Qatif, other reports suggested. Saudi women still face many curbs in public life, including driving. A total of 978 women registered as candidates, alongside 5,938 men. Officials said about 130,000 women had registered to vote in Saturday’s poll, compared with 1.35 million men. The disparity was attributed by female voters to bureaucratic obstacles and a lack of transport, the AFP news agency says. Female candidates were also not allowed to address male voters directly during campaigning. Turnout was high, state media reported. Salma bint Hizab al-Oteibi was named as Saudi Arabia’s first elected female politician, after winning a seat on the council in Madrakah in Mecca province.

She was running against seven men and two women, the electoral authorities said.  Elections of any kind are rare in the Saudi kingdom – Saturday was only the third time in history that Saudis had gone to the polls. There were no elections in the 40 years between 1965 and 2005. The decision to allow women to take part was taken by the late King Abdullah and is seen as a key part of his legacy. In announcing the reforms, King Abdullah said women in Saudi Arabia “have demonstrated positions that expressed correct opinions and advice”. Before he died in January, he appointed 30 women to the country’s top advisory Shura Council. There were 2,100 council seats available in Saturday’s vote. An additional 1,050 seats are appointed with approval from the king.