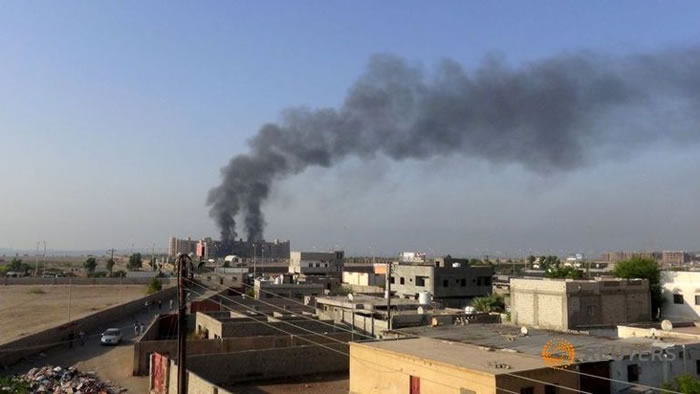 Islamic State in Yemen on Tuesday claimed coordinated suicide bombings targeting the Yemeni government and the Arab military coalition in the southern city of Aden that killed 15 Arab and Yemeni troops.

The bombings were Islamic State’s first known attacks on the Yemeni administration, which had made the al-Qasr hotel in the northwest of the port city its headquarters since it returned to Yemen last month.

Prime Minister and Vice President Khaled Bahah and his ministers escaped unharmed, and their spokesman said they would remain in Aden to continue their work. At two Gulf Arab military facilities that were also bombed, at least four Emirati soldiers were killed, according to the UAE state news agency WAM. A Yemeni official said 11 Yemeni troops had died in the attacks. “In a blessed operation facilitated by God, four martyrdom operations targeted a gathering of Saudi, Emirati and Yemeni officers,” Islamic State said in a statement. The group had previously refrained from openly targeting Yemen’s government and the Saudi-led coalition that has been fighting the Iran-allied Houthis for over six months. But its attacks come as the Yemeni government, newly returned from exile in Saudi Arabia, is trying to restore order in Aden following the expulsion of the Houthis by Yemeni and Gulf Arab troops in July.

Islamist militants of various factions had tried to establish themselves in the city, but faced opposition from local militias. Islamic State, which is centered in Iraq and Syria, first emerged in Yemen in March with a series of suicide attacks on Shi’ite Muslim mosques in which 137 people died. Two of the suicide bombers were driving Yemeni military vehicles, a Yemeni military source told Reuters. Coalition countries and some Yemeni officials had earlier blamed the Houthis for the attacks. Islamic State distributed pictures on Twitter showing smiling men it said were the suicide bombers and the hotel at the moment it was hit by a big orange fireball. The plush al-Qasr hotel was serving as informal headquarters of the administration and of Emirati troops based in the city. Salem al-Yazidi, a Yemeni fighter with a local militia allied with Hadi, described chaotic scenes when he rushed to aid the victims of the blast at the hotel. “There was a big hole in the ground and what looked like the limbs of the bomber around it,” Yazidi told Reuters.