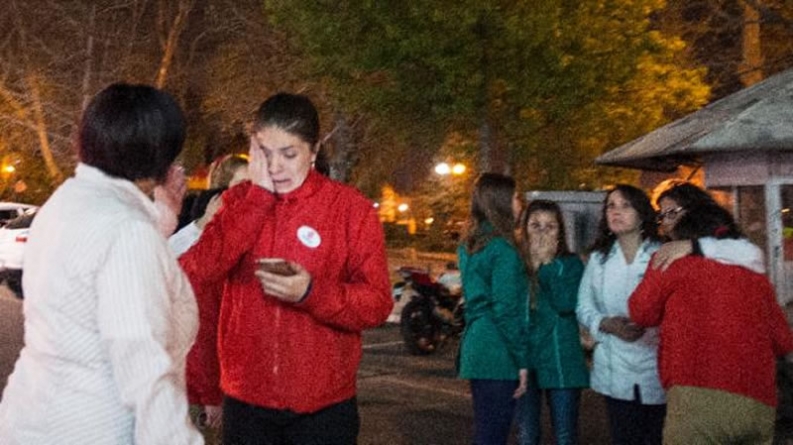 A massive 8.3-magnitude earthquake struck the centre of Chile on Wednesday, triggering the evacuation of coastal areas and warnings that tsunami waves could reach as far as Japan.

At least five people were killed and 10 hurt in Chile, while a million were evacuated and one person went missing. Thousands of terrified residents rushed out onto the streets in the capital Santiago. The quake was felt as far away as Argentina, where buildings also swayed.

The United States Geological Survey (USGS) put the shallow offshore quake at a magnitude of 8.3 and said it hit just 228 kilometres (about 140 miles) north of Santiago, a city of 6.6 million people. The quake, which struck at 7:54 pm, hit at a depth of eight kilometres, USGS said. Seismologists also reported two aftershocks, both above 6.0. The Chilean government put the main earthquake at 8.0 on the Richter scale. Interior Minister Jorge Burgos said that the evacuation of coastal towns and cities was ordered as a precautionary measure. The quake was felt as far away as Buenos Aires, about 1,400 kilometres away, while a tsunami warning was initially in place for the whole of Chile and Peru’s Pacific coastline.

The two dead were a woman in Illapel, close to the epicentre, and an 86-year-old man in Santiago, where there were scenes of pandemonium as thousands fled swaying buildings. “We fled our building and everything started to move very strong,” resident Pablo Cifuentes told local Cooperativa radio.In coastal La Serena, in the north of Chile, “people were running in all directions,” said resident Gloria Navarro. A similar fear seized residents in Argentina, while El Salvador, in Central America, was also on the lookout for destructive waves. “We went into a panic and the floor kept moving. We went out into the hallway and down the stairs,” Celina Atrave, 65, who lives in a 25-story high-rise near downtown Buenos Aires, told AFP.