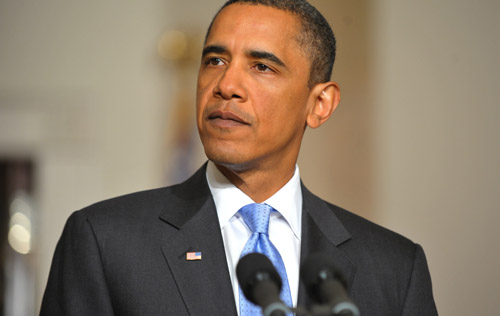 With the UN moving towards completion of the audit of Afghanistan’s presidential run-off election, US President Barack Obama has asked leading presidential candidates to work out a deal on national unity government at the earliest. According to National Security Council Spokesperson Caitlin Hayden, President Obama spoke separately with Afghan presidential candidates Dr Ashraf Ghani and Dr Abdullah Abdullah on Friday to “welcome the commitments they each made earlier this month to form a national unity government and to accept the outcome of the ongoing electoral audit.”

The President also thanked Dr Ghani and Abdullah for their continued leadership in working through the details of forming a national unity government and “urged them to finalise a deal as soon as possible.” The President reaffirmed the United States’ continued commitment to supporting the Afghan people going forward, Hayden said in a readout of the calls. Obama made the calls to top contenders of power as the US and its NATO allies plan a drawdown from the country with the twin Afghan political and security transitions after more than 13 years of war.

Meanwhile, with two-thirds of the ballot boxes from the audit of the presidential run-off election now processed, the United Nations in Afghanistan urged the campaign staffs of Dr Abdullah and Dr Ghani to cooperate fully with electoral authorities to bring the audit to completion at the earliest time. According to the UN Assistance Mission in Afghanistan (UNAMA), any further delays only exacerbate the already heavy toll that the current uncertainty has on the political, security and economic environment, as well as on the lives of ordinary Afghans. “An audit of this scale and complexity has never been attempted before anywhere in the world,” said the Secretary-General’s Special Representative for Afghanistan and head of UNAMA, Jan Kubis, in a statement from Kabul.

“I commend all those who have contributed to the progress in moving this critical process forward to the point where a credible outcome will soon be known,” he said, adding “Then we expect that both leaders and their campaigns will honour their commitments to respect the outcome of the process.”Kubis said the UN expected that, besides the rapid conclusion of the vote audit process, the two presidential candidates would also at the earliest time reach an agreement on the establishment of a national unity government, which would lead Afghanistan from the current situation to stability.

“The government of national unity based on partnership is the only option acceptable to the Afghan people and the international community. Speculation about any unconstitutional alternatives or appeals for civil disobedience can only worsen the current complicated situation,” he said. UNAMA notes that the audit is unique for Afghanistan in terms of its scale, depth, observation, international supervision and the genuine joint responsibility given to the two campaigns for oversight of the process. The features of this ambitious exercise and the request to the international community to help implement it were set out in the 12 July Agreement reached between the two candidates.  “

The UN is dedicated to playing its part fully so that the audit effectively separates valid votes from fraudulent ballots in order to determine the will of Afghan voters and promote the ultimate goal of helping Afghanistan achieve its first-ever peaceful transfer of power from one elected president to another,” said Kubis. He added: “Rarely have so many recognised experts and highly experienced electoral professionals been brought together at one time to support an elections process.”

Afghan President Hamid Karzai said Saturday his successor would take office on September 2, despite a slow-moving vote audit designed to eliminate fraudulent ballots cast for the two contenders. “The Afghan government is totally ready for the inauguration ceremony of the new president on the date of September 2,” the presidential palace said in a statement. The date would not change, according to the statement, which was issued following talks between Karzai and the head of the UN mission in Afghanistan Jan Kubis.

The new president was due to be inaugurated on August 2, in Afghanistan’s first democratic transfer of power, but the government has been paralysed for months after the first round of the presidential election failed to produce a clear winner and the second round of voting in June triggered allegations of massive fraud. As fears grew of a return to civil war, the United States last month brokered an emergency deal designed to end the impasse between poll rivals Ashraf Ghani, a former World Bank economist, and former anti-Taliban fighter Abdullah Abdullah. But neither candidate appears willing to back down, and the dispute looks set to break out again in the coming days when early results emerge from an anti-fraud audit of all eight million votes.

The audit has checked more than 60 percent of votes, and the next stage of invalidating fraudulent ballots will likely raise tensions between the candidates – who are also meant to be in talks about a post-election unity government. The United States had been pushing for the next president to be inaugurated before a NATO summit starting on September 4, which should sign off on follow-up support after the transatlantic alliance’s combat mission in Afghanistan ends this year.

The political crisis would worsen sharply if either candidate pulls out of the audit or rejects its outcome, with possible angry street protests in Kabul by aggrieved supporters set to pose a major challenge to the national security forces. The election deadlock has revived ethnic divisions that lay behind the 1990s civil war in Afghanistan. Many of Ghani’s supporters are Pashtuns in the south and east, while Abdullah’s loyalists are Tajiks and other northern groups. Uncertainty has also shaken the fragile economy, which is dependent on falling aid funding as the 13-year international effort to develop Afghanistan winds down. -nation