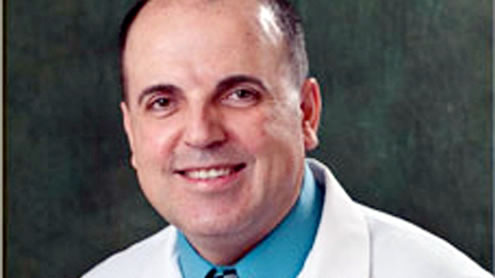 A Michigan oncologist charged with intentionally misdiagnosing patients with cancer as part of a major Medicare fraud operation will remain in prison until trial, with court officials scared he will flee to the Middle East. Dr Farid Fata – who is accused of ordering unnecessary treatments for his patients, such as chemotherapy, to enrich himself through insurance programs – made an application in the federal court to have his bond reduced from $9 million to $500,000 so he could leave prison, where he has been held since August 6.

However the move backfired for the 45-year-old, who works out of metropolitan Detroit, with a judge today removing Fata’s bond completely, based on the ‘serious risk’ he would leave America for his native country, Lebanon, if given the chance. The prosecution successfully claimed that not all of Fata’s considerable assets had been seized since his arrest and that he could fund a trip overseas for himself and his wife. 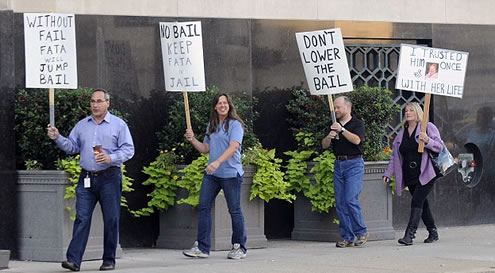 ‘We can’t be sure how much money he has out there,’ prosecutor Catherine Dick said . It is alleged Fata received about $35 million from Medicare via his insurance scam over a two year period. “Obviously there is a presumption of innocence … but the court feels there is a serious risk of flight,’ U.S. District Judge, Paul Borman, said. ‘The charges are serious.’

Defense attorney Christopher Andreoff, however, argued Fata should be confined to his home with an electronic monitor. Andreoff said it’s also difficult to prepare for trial when Fata is being held at a federal prison in Milan, 50 miles southwest of Detroit. ‘I need my client to explain the significance of all the medical records,’ Andreoff said.

The government alleges that Fata exposed numerous patients to powerful cancer-fighting drugs when they didn’t have cancer, which he denies. Outside court today about a dozen people protested his possible release. Signs read,’Without fail Fata will jump bail’ and ‘No bond for death doctor’. One woman, Michelle Mannarino held a sign with a picture of her late mother, Joan Donohue, 76, and the message, “I trusted him once with her life.” The Melbet Affiliate is targeted at serious webmasters who are capable of generating high traffic on the sports betting theme. There are no limits to the earning possibilities with Melbet Affiliate program . It all depends completely on your skills and available resources.

Mannarino said Fata insisted on months of chemotherapy even after her mother’s breast cancer was in remission. Donohue died of kidney failure in 2010. ‘I believe we’d still have her today,’ Mannarino said. Angela Swantek, an oncology nurse who spent time at one of Fata’s clinics, told ABC News that she first complained to investigators about Fata’s alleged wrongdoings as far back as 2010.

‘I don’t know how he’s gotten away with it for this long,’ she told ABC News. ‘I was disgusted. I got in the car, I was still sitting in the parking lot and I was truly almost in tears just because of what I saw and how patients were getting their chemotherapy.’ Fata’s attorney, Christopher Andreoff, says the government is wrong and that his client is not guilty of anything.

‘The government has not retained an expert to give an opinion that there was a mistreatment, or misdiagnosis, or unnecessary tests given to any patient,’ he said. A February 4 trial date has been set, but that could change after an update hearing in December. If convicted, Fata faces up to 20 years in jail. – Dailymail

Internet Revolution that Could make your TV Obsolete