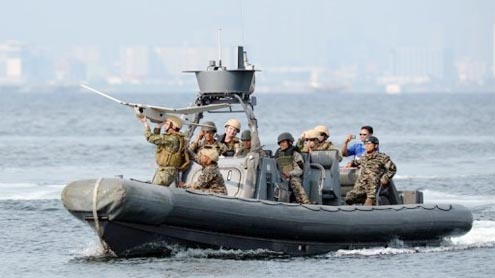 The United States and the Philippines have opened talks on expanding the American military presence in the Southeast Asian nation.

The two sides are negotiating an agreement that would allow U.S. forces and military equipment temporary access to Philippine defense camps.Manila is pushing to bolster its defenses as China presses maritime claims to most of the mineral and energy-rich South China Sea. Philippine officials say having an increased U.S. rotational presence would help support the country’s “minimum credible defense” posture.On Monday, Foreign Secretary Albert del Rosario said that the Philippines was determined to use diplomacy to resolve the disputes, but stressed the government would do everything to protect its territory.

“Our region needs to know that we are steadfastly for peace,” del Rosario said. “But that we stand ready to tap every resource, to call on every alliance, to do what is necessary, to defend what is ours, to secure our nation and to keep our people safe.”Earlier this month, the Philippines took formal possession of a refurbished former U.S. Coast Guard cutter obtained under a bilateral military alliance with Washington. The vessel joins another former U.S. cutter recommissioned by the Philippines in 2011.John Blaxland, a senior fellow at the Strategic and Defense Center at the Australian National University, suggests the talks are mutually beneficial.

“The Philippines is looking to clearly bolster its position in a situation where, for years, it has been the lowest-spending in the region on defense matters, and contrast that with neighboring countries like Vietnam, Thailand and Singapore, and it’s been happy for the United States to pick up a bit of the bill there in terms of dealing with Islamic insurgency in the south and in terms of, basically, the security umbrella that’s been implicit in the mutual defense treaty with the United States,” Blaxland said.He added that the United States is looking to shift its balance around the Pacific.

“If you think about where it’s postured, on the DMZ in Korea, on Okinawa, on Guam, it’s got a very small foothold upon which to base ground forces and upon which it can use air bases and naval facilities,” he said. “So, being able to expand its footprint in the Philippines, much like it did in the Cold War, it makes a lot of sense in terms of giving the United States some strategic options.”The Philippines was host to U.S. bases that were home to tens of thousands of service members until domestic pressure forced them to close in 1991.An agreement in 1999 allowed for the resumption of joint military training exercises. Since 2002, hundreds of U.S. troops have been providing training to Philippine troops battling Islamic militants in the south. – VOANews