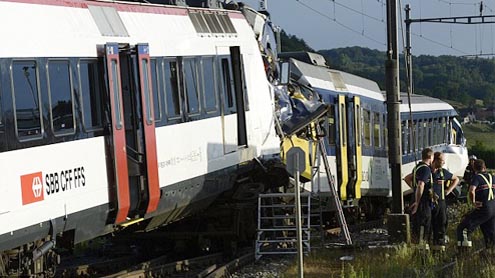 The body of the train driver has been found in the wreckage following a head-on train crash in Switzerland that left at least 35 passengers injured.

The driver was pulled from the debris two trains collided on the same track after travelling towards each other near Granges-Marnand station in the west of the country.Dozens of passengers were hurt, four of them seriously, in the crash, which happened just before 7pm local time (6pm BST).Police, ambulances, helicopters and firefighters were on the scene following the crash, according to Swiss newspaper the Geneva Tribune.

‘As our train arrived at the station, another train has collided into us,’ said one witness on the train.Vaud state police spokesman Jean-Christophe Sauterel said rescue operations were still under way tonight at the site on a regional line about 31 miles south-west of the capital, Bern.’These are regional trains,’ he added. ‘The speeds are a little lower and even if one deeply regrets the likely loss of life of one person as well as five serious injuries, the situation could have been much more catastrophic.’

Pictures on the website of local daily 24 Heures showed the mangled wreckage of the two trains still on the tracks. A Reuters photographer at the scene said the trains had collided head on.Photographs from the site showed the two regional trains locked together, partly lifted off the tracks by the force of the collision. One of the trains was heading to Lausanne, the other to Payerne.Public TV station SRF quoted another Vaud state police spokesman, Pierre-Olivier Gaudard, as saying that one person had yet to be recovered from the wreckage.

Website 20min.ch quoted Patricia Claivaz of the Swiss rail company CFF as saying the trapped man, a driver of one of the trains, had been located.He said it was too early to find the cause of the crash.One of the injured was taken to Lausanne by helicopter. Others were treated at the site by paramedics or taken to hospital by ambulance.Last Wednesday, 79 people were killed in a high-speed derailment in Santiago de Compostela, Spain. – DailyTimes