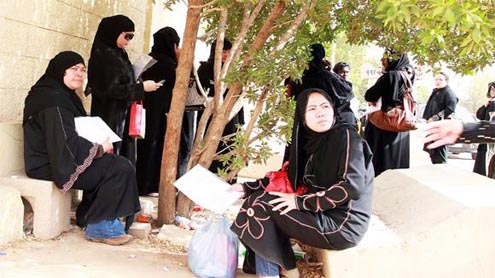 The Ethiopian government has canceled 40,000 work visas for housemaids destined for the Kingdom and has permanently stopped sending any manpower, local media reported.

The decision apparently came in retaliation for the Saudi government’s decision last week to impose a temporary ban on the recruitment of house workers from Ethiopia.The decision, jointly announced by the Ministries of Interior and Labor, came as investigations were launched into the recent separate incidents involving the murder of children by the maids who were looked after them.Salih Harnadah, a member of the Recruitment Committee at the Jeddah Chamber of Commerce and Industry (JCCI), said the Ethiopian government had halted transactions including visas issued before the Kingdom’s latest recruitment ban.

There are an estimated 40,000 houseworker visas whose fees are processed by recruitment offices. The money will be refunded to Saudi citizens if the Ethiopian government stands by its decision, he said.Meanwhile, the Ministry of Labor has opened channels of communications with nine countries for the recruitment of house workers.Ministry Undersecretary for International Cooperation Ahmed Al-Fihaid said deals will be signed with these countries to make recruitment procedures easier.

He said India will be the first country to sign houseworker recruitment deals following a similar step with the Philippines at the beginning of the current Hijri year.The ministry has been in contact with Vietnam, Cambodia and seven other countries, including Nepal, Laos and Bangladesh, to recruit house workers, notably female housemaids. However, the finalization period is difficult to predict since it rests on internal procedures within those countries, he said.

He said the step is aimed at opening new labor markets and diversifying, adding that salaries will be determined by the countries from which houseworkers are recruited in coordination with the Ministry of Labor.In a related development, recruitment dealers said the memorandum of understandings (MoU) being worked out with the relevant countries, notably the Philippines and Sri Lanka, will help bridge the gap and facilitate recruitment procedures to recruit house workers as easily as possible.

Mohammed Khawaji, a member of the National Recruitment Committee at the Council of Saudi Chambers (CSC), said a delay in signing an agreement with Sri Lanka has caused recruitment costs to rise to between SR17,000 to SR22,000 compared to SR13,000 to SR17,000 in the Philippines although Filipino house maids are more qualified. – ArabNews