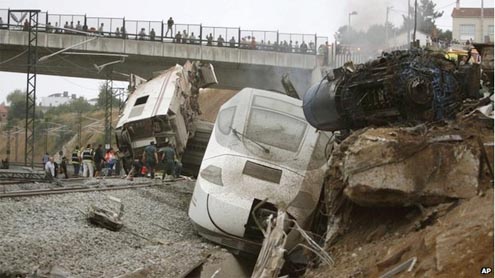 A train has derailed in north-western Spain, killing at least 77 of its 218 passengers and injuring more than 100, officials in the Galicia region say.

All eight carriages of the Madrid to Ferrol train came off the tracks near the city of Santiago de Compostela.Media reports say the train may have been travelling at more than twice the speed limit around a curve.Officials have not commented on the cause. Analysts say it is the worst train accident in Spain in 40 years.

Spain generally has a relatively good record in terms of rail safety, says the BBC’s Tom Burridge in Madrid.This is a country which has invested huge amounts of money in its rail network, he says.Railway firm Renfe said the train came off the tracks on a bend about 3 or 4km (2-2.5 miles) from Santiago de Compostela station at 20:41 local time (18:41 GMT).It was on the express route between Madrid and the ship-building city of Ferrol on the Galician coast. Renfe says it and the track operating company Adif are collaborating with a judge appointed to investigate the accident.

Government officials said they believed the crash was an accident, but that no statement would be made regarding the cause without a proper investigation.”We are moving away from the hypothesis of sabotage or attack,” one unnamed official said.Rescue workers have continued to search for survivors in the wreckage.They have so far recovered 73 bodies from the accident site, while four more people died in hospital, a spokeswoman for Galicia’s supreme court said on Thursday. Judges are responsible for registering deaths in Spain.

Images from the site showed bodies covered with blankets next to the tracks, as emergency crews searched the wreckage.More than 140 passengers were receiving treatment for a range of light to more serious injuries, a health official told reporters on Thursday morning.Residents flocked to hospitals in the area to donate blood in response to an appeal.Meanwhile, 320 Spanish police officers were deployed to help out the rescue operation.

The leader of the regional government Alberto Nunez Feijoo described it as “a Dante-esque scene”, in comments to Radio Cadena Ser.One witness, Ricardo Montesco, described how the train carriages “piled on top of one another” after the train hit a curve.”A lot of people were squashed on the bottom. We tried to squeeze out of the bottom of the wagons to get out and we realised the train was burning…I was in the second wagon and there was fire. I saw corpses,” he told Spanish Cadena Ser radio station.

Several eyewitnesses described the train travelling very fast before it derailed. The derailment happened on the eve of Santiago de Compostela’s main festival where thousands of Christian pilgrims were expected to flock to the city in honour of Saint James. The city’s tourism board said all festivities planned for Thursday have been cancelled.Local journalist Francisco Camino said the region was in shock.

“This is a tiny place and nothing happens here, nothing important or tragic,” he told the BBC.”We were preparing for the celebrations and now this could turn out to be the worst train crash in many years.Prime Minister Mariano Rajoy, who was born in Santiago de Compostela, convened an emergency ministerial meeting late on Wednesday. He is due to visit the scene of the accident on Thursday.”I want to express my affection and solidarity with the victims of the terrible train accident in Santiago,” Mr Rajoy said. – BBC