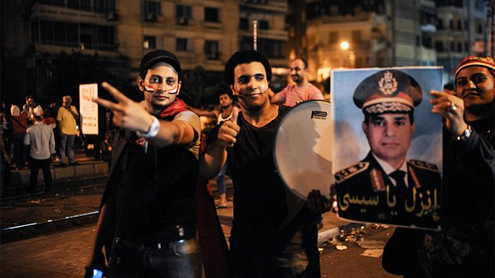 Deposed Egyptian president Mohamed Morsi is being held under house arrest after being toppled by the same kind of Arab Spring uprising that brought the Islamist leader to power just a year ago.

Celebrations took place across Egypt all last night after the head of Egypt’s armed forces issued a declaration suspending the constitution and appointing the head of the constitutional court as interim head of state.Gehad el-Haddad, a spokesman for the Muslim Brotherhood party, said Morsi was under house arrest at a Presidential Guard facility where he had been residing, while 12 of his aides were also being held.Arrest warrants have also been issued for 300 members of the Muslim Brotherhood movement.The military yesterday also suspended the Islamist-drafted constitution, called for new elections and announced it would install a temporary civilian government.

The senior judge in Egypt’s supreme constitutional court, Adly Mansour, was sworn in as interim president in Cairo today.In a televised broadcast, flanked by military leaders, religious authorities and political figures, General Abdel Fattah al-Sisi said the ‘roadmap’ had been agreed by a range of political groups.Millions of anti-Morsi protesters around the country erupted in celebrations after the televised announcement by the army chief on Wednesday evening.Fireworks burst over crowds in Cairo’s Tahrir Square, where men and women danced, shouting ‘God is great’ and ‘Long live Egypt.’

Fearing a violent reaction by Morsi’s Islamist supporters, troops and armoured vehicles deployed in the streets of Cairo and elsewhere, surrounding Islamist rallies.Clashes erupted in several provincial cities when Islamists opened fire on police, with at least 14 people killed, security officials said.The army took control of state media and blacked out TV stations operated by the Muslim Brotherhood. The head of the Brotherhood’s political wing was arrested.’The people and the army are one hand,’ protestors cheered in the square, amid the roar of horns and chanting.

William Hague has called for restraint, as he said the UK does not support military intervention and warned British citizens to avoid all non-essential travel to the country – apart from the Red Sea resorts – as thousands of demonstrators took to the streets all over the North African state.It comes as President Barack Obama urged Egypt’s military to hand back control to a democratic, civilian government without delay, but stopped short of calling the ouster of President Mohammed Morsi a coup.

Obama said he was ‘deeply concerned’ by the military’s move to topple Morsi’s government and suspend Egypt’s constitution. He said he was ordering the U.S. government to assess what the military’s actions meant for U.S. foreign aid to Egypt.Under U.S. law, the government must suspend foreign aid to any nation whose elected leader is ousted in a coup d’etat. The U.S. provides $1.5 billion a year to Egypt in military and economic assistance that is considered a critical U.S. national security priority.’I now call on the Egyptian military to move quickly and responsibly to return full authority back to a democratically elected civilian government as soon as possible through an inclusive and transparent process, and to avoid any arbitrary arrests of President Morsi and his supporters,’ Obama said.

And U.N. Secretary-General Ban Ki-moon has also appealed for calm and restraint in Egypt, as well as the preservation of rights such as freedom of expression and assembly.Many Egyptians in their protests have voiced deep frustrations and legitimate concerns,’ he said in a statement that did not condemn the Egyptian armed forces’ ouster of Mursi.’At the same time, military interference in the affairs of any state is of concern,” he said. “Therefore, it will be crucial to quickly reinforce civilian rule in accordance with principles of democracy.’

Two U.S. officials have said Egyptian defence leaders, who ousted the president, have assured the U.S. that they are not interested in a long-term rule.The official says the leaders, in calls with Defense Secretary Chuck Hagel and General Martin Dempsey, chairman of the Joint Chiefs of Staff, pledged to put a civilian government in place quickly.U.S. officials also say the Egyptian military has said it will take steps to ensure the safety of Americans in Egypt, including the diplomatic mission.’During this uncertain period, we expect the military to ensure that the rights of all Egyptian men and women are protected, including the right to peaceful assembly, due process, and free and fair trials in civilian courts,’ he said.

Four people have been killed in clashes between Morsi supporters and security forces in the northern city of Marsa Matrouh after the president was ousted by the army, Governor Badr Tantawi has said.Meanwhile, a statement on the Egyptian president’s office’s Twitter account has quoted Mohammed Morsi as calling military measures ‘a full coup’.And it has been reported Egypt’s descent into even deeper political turmoil will almost certainly put a multi-billion dollar international bailout on hold and lead to an even more painful economic crisis with worsening fuel shortages and higher prices on basic goods.

The Egyptian president’s national security adviser had warned earlier today that a military coup was underway and there would be ‘considerable bloodshed’ as millions of thousands of people took to the streets.With troops and tanks taking up positions in keys part of major Egyptian cities and tensions high, there were unconfirmed reports that President Mohammed Morsi was under house arrest after the deadline set by the army for him to reach an agreement with opposition protestors expired.His security advisor Essam El-Haddad said Mr Morsi was calling for peaceful resistance to the army’s ‘unlawful’ move against the democratically elected leader but stressed his supporters should not use violence.

However, he added : ‘In this day and age no military coup can succeed in the face of sizeable popular force without considerable bloodshed.‘There are still people in Egypt who believe in their right to make a democratic choice. Hundreds of thousands of them have gathered in support of democracy and the presidency. And they will not leave in the face of this attack. To move them, there will have to be violence.’Nearly 40 people have died so far since the unprecedented protests began in Sunday and last night there were reports of bloody clashes between Islamist supporters of Mr Morsi and his Muslim Brotherhood and troops in the capital Cairo.With millions of anti-Morsi protestors on the streets of dozens of cities and towns celebrating in the belief the military is on their side and facing the president’s supporters, there were fears the death toll would rise significantly.

Mr Morsi had spent today working normally at a regular presidential office in a compound of the Republican Guard in suburban Cairo, officials said, while senior military figures held a series of meetings with opposition leaders aimed at ending the crisis.There had been no official word from the military, who had said repeatedly there would not be a coup, but soldiers were seen erecting barbed wire around the compound.A military source said he expected the army to first call political, social and economic figures and youth activists for talks on its draft roadmap for the country’s future.

But observers said it certainly appeared to be a coup just one year after Mr Morsi was elected at the ballot box.In a further sign of the extent of the military control, airport officials said a travel ban had been issued against Mr Morsi and Brotherhood leader Mohammed Badie as well as his deputy Khairat el-Shater.Officials said the travel ban is linked to Mr Morsi’s escape from prison with more than 30 other Muslim Brotherhood figures during the 2011 Arab Spring uprising against autocrat ex-president Hosni Mubarak.

As the afternoon ultimatum set by the army approached, the military had moved to tighten its control on key institutions, even putting officers in the newsroom of state TV with neither side prepared to compromise.Crack troops were deployed in news-production areas. Officers from the army’s media department moved inside the newsroom and were monitoring output, though not yet interfering, staffers said, speaking on condition of anonymity because they were not authorised to talk about the arrangements.

Military chiefs, vowing to restore order in a country racked by demonstrations against Mr Morsi’s Islamist policies, issued a call to battle in a statement headlined ‘The Final Hours’. They said they were willing to shed blood against ‘terrorists and fools’ after Mr Morsi refused to give up his elected office.The president’s spokesman countered that it was better that he die in defence of democracy than be blamed by history.In an emotional, rambling midnight television address, Mr Morsi insisted he was democratically elected and would stay in office to uphold the constitutional order, declaring: ‘The price of preserving legitimacy is my life.’

‘There is only one thing we can do: we will stand in between the tanks and the president,’ Mr El-Haddad said at the movement’s protest encampment in a Cairo suburb that houses many military installations and is near the presidential palace.‘We will not allow the will of the Egyptian people to be bullied again by the military machine.’Prime Minister David Cameron yesterday issued a plea for an end to violence in Egypt, as The Foreign and Commonwealth Office (FCO) warned against all but essential travel to most parts of the country.

Mr Cameron said Mr Morsi must show he is responsive to the concerns of its citizens, adding : ‘These are deeply disturbing scenes, the level of violence is appalling. We should appeal to all sides to calm and stop the levels of violence, and particularly sexual assaults.’Mr Cameron continued : ‘It is not for this country to support any single group or party. What we should support is proper democratic processes and proper government by consent.‘Very clear messages have been sent to president Morsi – including by President Obama who spoke to him directly, and we have also been communicating through our ambassadors – that, yes, he has a democratic mandate and we respect that, but democracy also means ensuring that everyone has a voice and that leaders have a responsibility to represent all Egyptians and show they are responsive to their concerns.

‘That’s what the government needs to do in order to bring about peace and stability in that country.’Meanwhile, the FCO is advising against travel to all regions of Egypt except resorts on the Red Sea in South Sinai and in the Red Sea Governorate on the Egyptian mainland.There are no travel restriction warnings for destinations in the region of Sharm el Sheikh, Taba, Nuweiba and Dahab which are popular with sun-seeking British tourists. – DailyMail