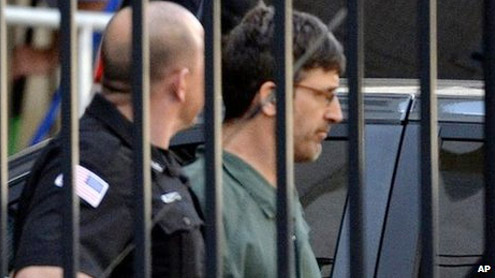 Two US men have appeared in court accused of plotting to build an X-ray weapon to kill enemies of Israel and the US with lethal rays of radiation.

Glendon Scott Crawford, 49, and Eric Feight, 54, allegedly sought funding to assemble the truck-mounted machine.But a synagogue, a Jewish organisation and the Ku Klux Klan alerted police after Mr Crawford approached them.The men are charged with conspiracy to provide support to terrorists.They face up to 15 years in prison if convicted.The authorities say they monitored the defendants, who are from New York state, to ensure they could not obtain a radiation source or harm members of the public.

It is alleged that in April 2012, Mr Crawford walked into a synagogue and “asked to speak with a person who might be willing to help him with a type of technology that could be used by Israel to defeat its enemies, specifically, by killing Israel’s enemies while they slept”.An undercover investigator was assigned to record conversations with the two men. Mr Crawford, an industrial mechanic for General Electric, knew Mr Feight through his work as an external contractor for the utility.

FBI agent Geoffrey Kent said in the indictment: “Crawford has specifically identified Muslims and several other individuals/groups as targets.”Mr Crawford is said to have told an undercover investigator that “radiation poisoning is a beautiful thing”.According to the indictment, Mr Crawford said he harboured animosity to those he perceived as hostile to the interests of the United States, individuals he referred to as “medical waste”.Both of the accused also said they were committed to building the device and discussed technical specifications, according to the indictment.

Investigators allege Mr Feight designed, built and tested a remote control for the system. The damaging effects of the radiation would have affected their victims only days later, according to the alleged plan.The two were arrested the same day as undercover investigators planned to offer access to a real but inoperable X-ray system.”This case demonstrates how we must remain vigilant to detect and stop potential terrorists, who so often harbor hatred toward people they deem undesirable,” prosecuting US Attorney Richard Hartunian said in a statement. – BBC