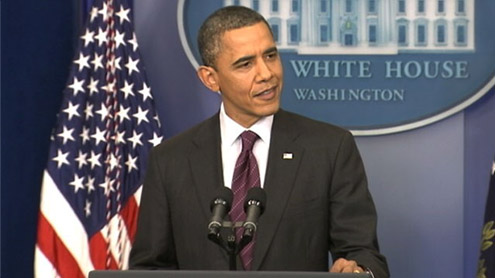 President Obama blamed part of the political gridlock in Washington, D.C., on “hyper-partisanship” while speaking at a fundraiser attended by Justin Timberlake and Jessica Biel  in New York City Monday afternoon, saying some Republicans worry too much about the reaction of conservative radio host Rush Limbaugh.

“What’s blocking us right now is sort of hyper-partisanship in Washington that, frankly, I was hoping to overcome in 2008.  And in the midst of crisis, I think the other party reacted, rather than saying now is the time for us all to join together, decided to take a different path,” Obama said at the Democratic National Committee fundraiser. “My thinking was after we beat them in 2012, well, that might break the fever, and it’s not quite broken yet.

“But I am persistent,” he said. “And I am staying at it.  And I genuinely believe that there are actually Republicans out there who would like to work with us but they’re fearful of their base and they’re concerned about what Rush Limbaugh might say about them. And, as a consequence, we get the kind of gridlock that makes people cynical about government and inhibits our progress.”

The president’s comments came at the first of three fundraisers in New York City Monday.  He spoke to 65  guests at a reception hosted by movie mogul Harvey Weinstein and actress Georgina Chapman. Later in the afternoon, the president addressed a second 60-person fundraiser hosted by Alexandra Stanton and Sam Natapoff.  Tickets to each event ranged from $16,200 to $20,000 and benefitted the DNC.

Tonight, the president will speak at a Democratic Congressional/Senate Campaign Committee fundraiser benefiting the House Senate Victory Fund at the Waldorf Astoria.While the president said hyper-partisanship has placed a wedge in political progress, he said he expects immigration reform to be achieved by year’s end.“If we stay with it, we will be able to get immigration reform done this year,” Obama said at the second fundraiser of the day.AbcNews