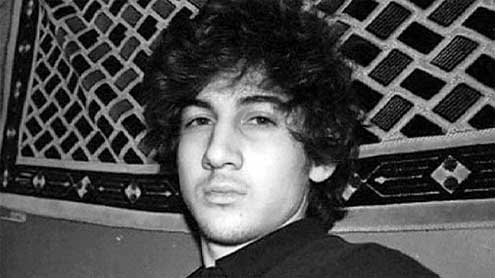 WATERTOWN: Lifting days of anxiety for a city and a nation on edge, police captured the surviving Boston Marathon bombing suspect, found bloodied in a backyard boat Friday night less than 24 hours after a wild car chase and gun battle that left his older brother dead and Boston and its suburbs sealed in an extraordinary dragnet.

“We got him,” Boston Mayor Tom Menino tweeted. A cheer erupted from a crowd gathered near the scene.”CAPTURED!!!” police added later. “The hunt is over. The search is done. The terror is over. And justice has won. Suspect in custody.”During a long night of violence Thursday and into Friday, brothers Dzhokhar and Tamerlan Tsarnaev killed an MIT police officer, severely wounded another lawman and hurled explosives at police in a desperate getaway attempt, authorities said.

Late Friday, less than an hour after authorities said the search for Dzhokhar had proved fruitless, they tracked down the 19-year-old college student holed up in the boat, weakened by a gunshot wound after fleeing on foot from the overnight shootout with police that left 200 spent rounds behind.He was hospitalized in serious condition, unable to be questioned about his motives.Tamerlan Tsarnaev, 26, died in the shootout early in the day. At one point, he was run over by his younger brother in a car as he lay wounded, according to investigators.

The violent endgame unfolded four days after the bombing and just a day after the FBI released surveillance-camera images of two young men suspected of planting the pressure-cooker explosives that ripped through the crowd at the marathon finish line, killing three people and wounding more than 180.The two men were identified by authorities and relatives as ethnic Chechens from southern Russia who had been in the U.S. for about a decade and were believed to be living in Cambridge, Mass. But investigators gave no details on the motive for the attack.

President Barack Obama said the nation owes a debt of gratitude to law enforcement officials and the people of Boston for their help in the search. But he said there are many unanswered questions about the Boston bombings, including whether the two men had help from others. He urged people not to rush judgment about their motivations.The breakthrough came when a man in a Watertown neighborhood saw blood on a boat parked in a yard and pulled back the tarp to see a man covered in blood, authorities said. The resident called 911 and when police arrived, they tried to talk the suspect into getting out of the boat, said Boston Police Commissioner Ed Davis.

“He was not communicative,” Davis said.Instead, he said, there was an exchange of gunfire — the final volley of one of the biggest manhunts in American history.Watertown residents who had been told in the morning to stay inside behind locked doors poured out of their homes and lined the streets to cheer police vehicles as they rolled away from the scene.Celebratory bells rang from a church tower. Teenagers waved American flags. Drivers honked. Every time an emergency vehicle went by, people cheered loudly.”They finally caught the jerk,” said nurse Cindy Boyle. “It was scary. It was tense.”

Police said three other people were taken into custody for questioning at an off-campus housing complex at the University of the Massachusetts at Dartmouth where the younger man may have lived.”Tonight, our family applauds the entire law enforcement community for a job well done, and trust that our justice system will now do its job,” said the family of 8-year-old Martin Richard, who died in the bombing.

The FBI was swamped with tips — 300,000 per minute — after the release of the surveillance-camera photos, but what role those played in the overnight clash was unclear. State Police spokesman Dave Procopio said police realized they were dealing with the bombing suspects based on what the two men told a carjacking victim during their night of crime.The search by thousands of law enforcement officers all but paralyzed the Boston area for much of the day. Officials shut down all mass transit, including Amtrak trains to New York, advised businesses not to open, and warned close to 1 million people in the entire city and some of its suburbs to unlock their doors only for uniformed police.

Around midday, the suspects’ uncle, Ruslan Tsarni of Montgomery Village, Md., pleaded on television: “Dzhokhar, if you are alive, turn yourself in and ask for forgiveness.”Until the younger man’s capture, it was looking like a grim day for police. As night fell, they announced that they were scaling back the hunt and lifting the stay-indoors order across Boston and some of its suburbs because they had come up empty-handed.But then the break came and within a couple of hours, the four-day ordeal was over. Dzhokhar Tsarnaev was captured about a mile from the site of the shootout that killed his brother.

Chechnya has been the scene of two wars between Russian forces and separatists since 1994, in which tens of thousands were killed in heavy Russian bombing. That spawned an Islamic insurgency that has carried out deadly bombings in Russia and the region, although not in the West.The older brother had strong political views about the United States, said Albrecht Ammon, 18, a downstairs-apartment neighbor in Cambridge. Ammon quoted Tsarnaev as saying that the U.S. uses the Bible as “an excuse for invading other countries.”

Also, the FBI interviewed the older brother at the request of a foreign government in 2011, and nothing derogatory was found, according to a federal law enforcement official who was not authorized to discuss the case publicly and spoke on condition of anonymity.The official did not identify the foreign country or say why it made the request.Authorities said the man dubbed Suspect No. 1 — the one in sunglasses and a dark baseball cap in the surveillance-camera pictures — was Tamerlan Tsarnaev, while Suspect No. 2, the one in a white baseball cap worn backward, was his younger brother.

Exactly how the long night of crime began was unclear. But police said the brothers carjacked a man in a Mercedes-Benz in Cambridge, just across the Charles River from Boston, then released him unharmed at a gas station.They also shot to death a Massachusetts Institute of Technology police officer, 26-year-old Sean Collier, while he was responding to a report of a disturbance, investigators said.The search for the Mercedes led to a chase that ended in Watertown, where authorities said the suspects threw explosive devices from the car and exchanged gunfire with police. A transit police officer, 33-year-old Richard Donohue, was shot and critically wounded, authorities said.

Dzhokhar Tsarnaev somehow slipped away. He ran over his already wounded brother as he fled, according to two law enforcement officials who spoke on condition of anonymity because they were not authorized to discuss the investigation. At some point, he abandoned his car and ran away.Tamerlan Tsarnaev died at a Boston hospital after suffering what doctors said were multiple gunshot wounds and a possible blast injury.The brothers had built an arsenal of pipe bombs, grenades and improvised explosive devices and used some of the weapons in trying to make their getaway, said Rep. Dutch Ruppersberger, D-Md., a member of the House Intelligence Committee.

Watertown resident Kayla Dipaolo said she was woken up overnight by gunfire and a large explosion that sounded “like it was right next to my head … and shook the whole house.”She said she was looking at the front door when a bullet came through the side paneling. SWAT team officers were running all over her yard, she said.”It was very scary,” she said. “There are two bullet holes in the side of my house, and by the front door there is another.”Tamerlan Tsarnaev had studied accounting as a part-time student at Bunker Hill Community College in Boston for three semesters from 2006 to 2008, the school said.

Dzhokhar Tsarnaev was registered as a student at the University of Massachusetts Dartmouth. Students said he was on campus this week after the Boston Marathon bombing. The campus closed down Friday along with colleges around the Boston area.The men’s father, Anzor Tsarnaev, said in a telephone interview with AP from the Russian city of Makhachkala that his younger son, Dzhokhar, is “a true angel.” He said his son was studying medicine.”He is such an intelligent boy,” the father said. “We expected him to come on holidays here.”

The city of Cambridge announced two years ago that it had awarded a $2,500 scholarship to him. At the time, he was a senior at Cambridge Rindge & Latin School, a highly regarded public school whose alumni include Matt Damon, Ben Affleck and NBA Hall of Famer Patrick Ewing.Tsarni, the men’s uncle, said the brothers traveled here together from Russia. He called his nephews “losers” and said they had struggled to settle in the U.S. and ended up “there by just hating everyone.” – YahooNews