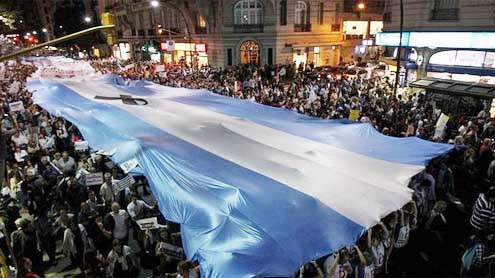 Tens of thousands of people in Argentina are taking part in protests against the government of President Cristina Fernandez de Kirchner.

Huge crowds marched through the capital Buenos Aires chanting slogans, banging pots and pans and waving banners. The protest was sparked by a government proposal to reform the judiciary but people also showed their discontent over high inflation and crime. Similar protests have also been held in other cities across Argentina. Many protesters told the BBC they were angry at a proposed government bill that would allow voters to choose the magistrates who appoint and remove judges.

The Argentine opposition has criticised the move saying it would politicise the judiciary. Opposition activists used social networks to mobilise the march, which was the biggest since November.There has been no comment so far from the Argentine government.President Fernandez left the country on Thursday to attend a summit in Peru. However, correspondents say there will be concern in government quarters that the opposition might take strength from this protest with crucial legislative elections later this year.

“I came to see if the Kirchners will leave… and that peace returns so that we can be a united country once again,” said Lorenzo Velazquez, a 51-year-old food worker in Buenos Aires.He carried a sign saying “2015 Sin Cristina” referring to the year when President Fernandez’s current term will end. Ms Fernandez’s late husband, Nestor Kirchner, was Argentina’s president from 2003 to 2007. His wife succeeded him and won re-election in 2011. – BBC