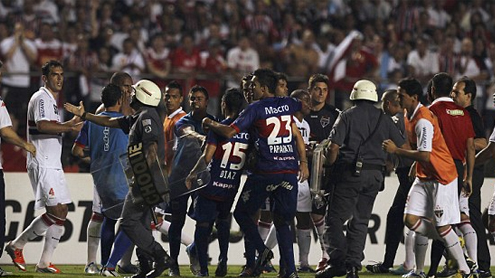 An Argentine football club has accused Brazilian security officials of beating and pulling guns on its players during the half-time interval of a cup final.

Tigre’s players refused to play the second half of the second leg of the Copa Sudamericana final.The move left Sao Paulo to be declared winners of the tournament at their home ground.Sao Paulo officials and players accused the Argentines of spoiling for a fight, and then running away.The controversy at Sao Paulo’s Morumbi stadium comes just 18 months before Brazil hosts the 2014 World Cup.

The Argentines said they were attacked by about 20 men following scuffles involving players and officials as the teams left the pitch at half time.Following Tigre’s refusal to play on, the referee signalled the end of the match – in which Sao Paulo had been leading 2-0 following a goalless first leg at Tigre’s stadium – and the Brazilian team’s players began celebrating. They were handed the trophy by officials from the South American Football Confederation.

Thousands of celebrating fans then filled one of Sao Paulo’s main streets.Tigre players reportedly stayed in their dressing room for several hours after the incident before going to a police station to register an official complaint.”They pulled two guns on us, the rest of the match is not going to be played,” Tigre coach Nestor Gorosito told Fox Sports at half time, referring to Brazilian military police and club stewards.

“They ambushed us and one of them pulled out a revolver and put it against [goalkeeper] Damian Albil’s chest. Their security and police also hit us, there were about 20 of them.”Argentine media carried photographs of a blood-stained dressing room and comments from players saying they had been hit with sticks.”They were going to lose by a big score,” Sao Paulo president Juvenal Juvencio told the club’s website. “Our biggest victory is the fact that the Argentines ran away.”Sao Paulo goalkeeper Rogerio Ceni said of Tigre: “They came here to fight, not to play.” -BBC