December 21: End of Mayan calendar, or end of the world? 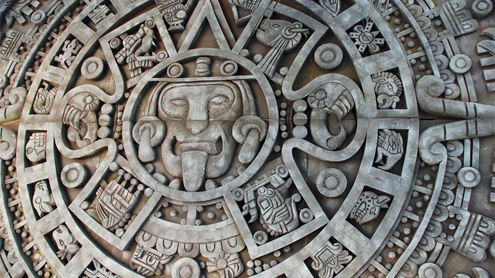 December 21: End of Mayan calendar, or end of the world?

Gonzalo Alvarez, who had just arrived in Cancun for two weeks of revelry linked to a major milestone in the Mayan calendar, seemed reasonably cheerful for a man about to swallowed up by the Apocalypse.

“We came to party and to get ready for the beginning of a new era,” said the 39-year old architect, as he gathered his luggage from a baggage carousel at Cancun’s airport.Alvarez had traveled to Mexico from Florida to witness firsthand the beginning of a new Mayan era on December 21, 2012, which will be marked with celebrations throughout southern Mexico and Central America.

Mexico is one of five countries preparing to observe the date, which marks the end of a more than 5,000-year era, according to the Mayan “Long Count” calendar, which began in 3114 BC.For many people in this region, December 21 will be a date for celebration.The start of the new Mayan calendar also is big business in this region, with tourism offices in no fewer than five countries aggressively promoting the date.

Millions of tourists are expected to flood into the region for celebrations that will include fireworks, concerts and other spectacles held at more than three dozen archaeological sites.In addition to Mexico, celebrations will be held in Belize, Guatemala, El Salvador or Honduras, and at least two heads of state — President Otto Perez of Guatemala and President Porfirio Lobo of Honduras — have confirmed that they will take part in festivities in their respective countries.But while some prepare for the end of the Mayan calendar, others fear with trepidation the date will usher in the end of the world.

Some New Age spiritualists are convinced of a December 21 “doomsday” foretold by Mayan hieroglyphs — at least according to some interpretations.The prophesy they refer to is found in an ancient Mayan monument in Tortuguero, Mexico, and is believed to have been left by a Mayan ruler.The Mayan leader, fresh from defeat on the battlefield, declared that the military setback was but one event in a larger cycle of time that would end in 2012.Many scholars say the prophesy was misinterpreted, however, and was not meant to suggest the end of all time, but simply the end of the old Mayan calendar and the beginning of a new one.

Indigenous experts scoff at the faulty and sensational misreadings of the Mayan calendars.“The Mayans had a cyclical concept of time, not one that ever focused on the end of the world,” Mexican archaeologist Jose Romero told AFP.Romero based his conclusions on his studies of the carved stone known as the Tortuguero Monument, which now is broken into six pieces divided between Mexico and the United States, including one piece which is housed in a museum in New York.Nevertheless, the current doomsday panic has spread far beyond Meso-America.

The trend has been fueled in part by movies like “2012” by Roland Emmerich and books like the novel “The Mayan Testament” by Steve Alten that have cashed in on the fad.Romero blames Hollywood for a rather fantastical interpretation of the hieroglyphs “without much knowledge of the facts” of Mayan history and culture.Meanwhile, the belief that the world will end on December 21 has traveled to the far reaches of the globe.In the Russian city of Tomsk, for example, a company is selling an “Apocalypse kit” that includes food and medicine with a bottle of vodka — or tequila if the customer prefers.

In the French Pyrenees, authorities have temporarily closed access to a mountain in the southwest of the country to avoid throngs of people fleeing from apocalypse.Indigenous leaders in Mexico, critical of the way the date is being commercialized, have convened a Mayan Peoples Council to focus more on the cultural significance of the new era.

“Like native cultures throughout the world, we want to maintain our cultural identity and preserve our ways of speaking, thinking and seeing the cosmos,” said Mary Coba, a tribal council representative.“Above all, we want to realize the possibility that, wherever we live, we are respected, and live free of discrimination, violence and poverty.”She said native people have prepared dignified observances for the new Mayan era, and that ceremonies marking the date would be simple but profound.“There are no real requirements,” she said. “We just ask that people arrive before five in the morning wearing white clothing and carrying a white candle.” – Khaleejnews