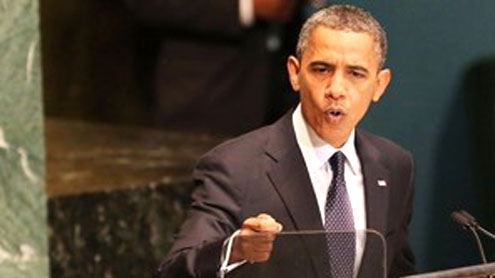 UNITED NATIONS: President Obama challenged world leaders Tuesday to condemn the violent attacks that have occurred against U.S. diplomats and missions in Libya and Egypt, suggesting that now is a key moment in the struggle for democratic freedom throughout the Middle East and North Africa.

Speaking to world leaders and diplomats gathered for the U.N. General Assembly, Obama told his audience that “it is the obligation of all leaders, in all countries, to speak out forcefully against violence and extremism.”“It is time to marginalize those who — even when not resorting to violence — use hatred of America, or the West, or Israel as the central principle of politics,” Obama said in the fourth address of his presidency to the assembly. “For that only gives cover, and sometimes makes excuses, for those who do resort to violence.”

Obama used his appearance to defend the U.S. role in the Middle East and North Africa to an extent that he had not done before, calling on those gathered to help ensure that the unpredictable political transition underway in the region ends in democratic rule and economic opportunity. He cited the violent conflict in Syria, the Palestinian national movement and other regional struggles as opportunities to reaffirm American support for those seeking freedom.But the president also acknowledged what he described as “the tensions between the West and an Arab world moving to democracy” — tensions he said have surfaced again in the recent attacks on Americans in Libya and Egypt.

He said they must be “honestly addressed,” then presented a strong defense of democratic values such as free speech, that he said should not be sacrificed despite the new challenges presented to governments and beliefs in the information age.“Just as we cannot solve every problem in the world, the United States has not, and will not, seek to dictate the outcome of democratic transitions abroad, and we do not expect other nations to agree with us on every issue,” he said.

Turning to the dispute over Iran’s nuclear program, Obama adopted a sterner tone. He said time is running out for a diplomatic solution and echoed his previous position that the United States is committed to stopping Tehran from developing a nuclear weapon.“A nuclear-armed Iran is not a challenge that can be contained,” he said. “It would threaten the elimination of Israel, the security of gulf nations and the stability of the global economy. It risks triggering a nuclear arms race in the region and the unraveling of the Non-Proliferation Treaty. That’s why a coalition of countries is holding the Iranian government accountable. And that’s why the United States will do what we must to prevent Iran from obtaining a nuclear weapon.”

The bulk of the 30-minute speech, however, was devoted to appealing for calm and tolerance in the aftermath of the protests and violence that swept many mainly Muslim countries this month in response to a YouTube video that disparaged the prophet Muhammad.Invoking the death of the American ambassador to Libya, J. Christopher Stevens, and three others in an assault on a U.S. diplomatic post there on Sept. 11, Obama said: “There is no speech that justifies mindless violence. There are no words that excuse the killing of innocents. There is no video that justifies an attack on an embassy.” – WP