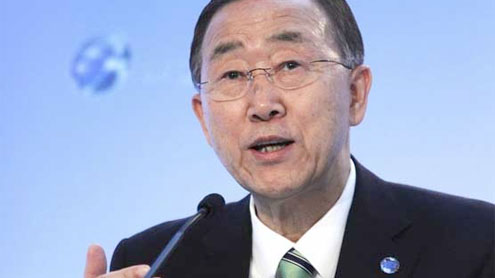 UN Secretary-General Ban Ki-moon said on Wednesday the maker of an anti-Islam film that triggered violent protests across the Muslim world abused his right to freedom of expression by making the movie, which he called a “disgraceful and shameful act.”

The film, posted on the Internet under several titles including “Innocence of Muslims,” sparked days of deadly anti-American violence in many Muslim countries, including an assault on the U.S. consulate in Benghazi in Libya in which the U.S. ambassador died.”Freedoms of expression should be and must be guaranteed and protected, when they are used for common justice, common purpose,” Ban told a news conference.

“When some people use this freedom of expression to provoke or humiliate some others  values and beliefs, then this cannot be protected in such a way.””My position is that freedom of expression, while it is a fundamental right and privilege, should not be abused by such people, by such a disgraceful and shameful act,” he said.A California man convicted of bank fraud was taken in for questioning on Saturday by U.S. authorities investigating possible probation violations stemming from the making of the video. He has denied involvement in the film and has now gone into hiding.

UN Secretary-General Ban Ki-moon called on world leaders to speak out and urge all people to respect the values and beliefs of others following recent incidents of intolerance and hatred that are being exploited.He said “voices of moderation and calm need to make themselves heard at this time.”Ban was addressing Tuesday s opening of the 67th session of the UN General Assembly as protests continued across the Mideast over an anti-Islam video produced in the United States.