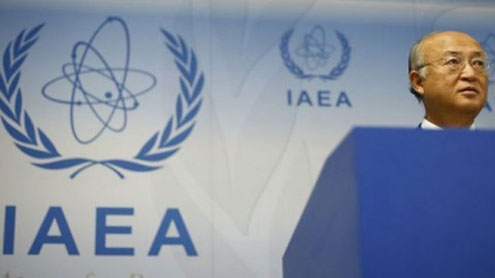 VIENNA: The UN atomic agency’s board approved with a crushing majority on Thursday a resolution criticising Iran brought by world powers that was also aimed at dissuading Israel from military action.

The resolution expresses “serious concern that Iran continues to defy” UN Security Council resolutions for it to suspend uranium enrichment, a process which can be used for peaceful purposes but also in a nuclear weapon.It also highlights the International Atomic Energy Agency’s complaint that activities at the Parchin base near Tehran, where it suspects nuclear weapons research took place, would “significantly hamper” inspectors — should Iran let them visit.

The resolution was introduced at the meeting of the IAEA’s 35-nation board of governors on Wednesday after days of haggling between Western nations and Russia and China, which are seen as more lenient on Teheran.It was approved by 31 countries, with Cuba voting against and Egypt, Ecuador and Tunisia abstaining, all four of them members of the Non-Aligned Movement of which Iran is currently the rotating president.

Another NAM member, South Africa, had introduced an amendment on a minor change of wording that resulted in several hours’ delay. The last resolution in November saw Cuba and Ecuador vote against and Indonesia abstain.Iran insists its expanding atomic programme is for peaceful purposes, but since the IAEA has repeatedly said that it is unable to vouch for this, the UN Security Council has passed six resolutions against Teheran, four with sanctions attached.

The United States and the European Union have also imposed additional unilateral sanctions that have hit Iran’s vital oil exports hard, and EU foreign ministers said last weekend they are considering additional measures.The IAEA resolution, the 12th in nine years, stopped short of referring Iran to the Security Council.But it was significant that Western nations were able to get Moscow and Beijing on board. – Khaleejnews