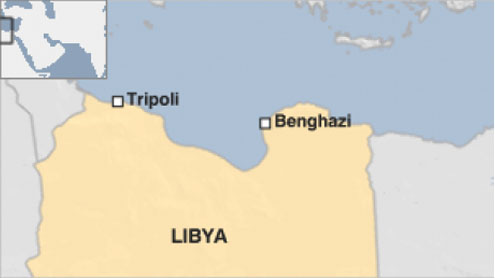 A Libyan army general, with a senior defence ministry role, has been shot dead in the eastern city of Benghazi.

General Mohamed Hadia al-Feitouri was returning home from Friday prayers when a group of gunmen pulled up in a car and opened fire, his son said.In recent months, Benghazi has seen a spate of killings of security officials who, like Gen Hadia, served under former Libyan leader Muammar Gaddafi.The incident comes a day after Libya’s new interim assembly assumed power.The historic June elections to the body – the first free vote in decades – faced boycott calls in Benghazi.

Some political groups in oil-rich eastern Libya, where the uprising that overthrew Col Gaddafi last year originated, fear domination by the capital Tripoli and the west.Gen Hadia was one of the first military officers to defect to the rebellion, the BBC’s Rana Jawad reports from Tripoli.He was the defence ministry official responsible for ammunition and weapons.The identity of the attackers and the motives behind the killing remain unclear, our correspondent says.Last week, the military intelligence service’s offices in Benghazi were hit by an explosion, but there were no casualties. – BBC