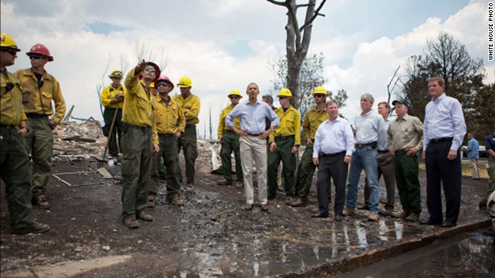 Speaking in Colorado Springs, Colorado, after touring areas ravaged by fires Friday, President Barack Obama said that he saw “enormous devastation” in some subdivisions but that authorities are also “starting to see progress.”

“When natural disasters like this hit, America comes together,” he said. The president touted the efforts of firefighters and federal, state and local agencies, expressing his hope that some good might yet come from the calamity.  “Some lessons are being learned about how we can mitigate some of these fires in the future. … Hopefully, out of this tragedy, some long-term planning occurs, and it may be that we can curb some of the damage that happens the next time,” the president said.  Friday also brought sad news to Colorado Springs about the deadly nature of the monster wildfire, as it raged nearby and came roaring down a mountain.

Authorities discovered an additional body in a house consumed by flames Friday, raising the death toll from the fire to two.  In all, 346 homes have been ravaged, and the threat still looms large. Another 20,000 homes and 160 businesses stand dangerously close to the blaze.  Distinctly evangelical tone in wildfire responses  The Waldo Canyon Fire has scorched more than 17,000 acres — close to 27 square miles — and brought fear, anxiety and grief to Colorado Springs, the state’s second-largest city that was, until a few days ago, happily situated in the valley below picturesque Pikes Peak.

It is one of many fires burning in the West right now — including in Idaho, Wyoming and Utah.  But Friday also brought some relief. By the afternoon, the Waldo Canyon Fire was 25% contained, up from 15% a day before.  “Hoping to have another good day tomorrow. … We got a long way to go. There’s still a lot of heat in this fire. There’s still a lot of smoke and lot of things we’re going to have to watch out for, but we are making progress, and we’re going to continue doing that,” said Jerri Marr, forest supervisor of the Pike and San Isabel National Forests and Cimarron and Comanche National Grasslands.  The fire, raging since last weekend, had been growing steadily, fueled by hot, arid conditions and winds that gusted at 65 miles per hour. Thursday was the first day that firefighters felt they were winning the battle.

The effort to tame the flames got a boost Friday from the military, which is deploying eight of the U.S. Forest Service’s Modular Airborne Firefighting Systems aboard C-130 aircraft. The systems will drop retardant on the Waldo Canyon Fire as well as other wildfires still burning in Colorado.  A battalion of U.S. Army troops from Fort Carson, Colorado, also began training Friday to fight wildfires. Five hundred and thirty troops are undergoing three days of training, according to Lt. Col. Steven Wollman, a spokesman for the 4th Infantry Division headquartered at the base just south of Colorado Springs.

A decision has not been made yet on whether to send the troops into the Waldo Canyon Fire. The U.S. Forest Service would have to make a specific request for the troops to be sent in, after they complete the training.  Colorado also got some help from California, a state all too familiar with rampant wildfire destruction. Gov. Jerry Brown on Friday directed the California National Guard to lend Colorado two C-130J airplanes, equipped with the Modular Airborne Firefighting System II. About 30 crew members will go east with the aircraft.

Colorado Springs Mayor Steve Bach, who has been present at media briefings, skipped talking to reporters Friday morning.  He attended an emotional meeting the evening before with residents wanting to know what had happened to their homes. And in the morning, he was gearing up for his meeting with the president, sorting out in his head what kind of federal aid he would ask for. “I really appreciate the president coming here … if nothing more than just to reassure us that this has a focus at a national level, that there are people all over this country who are concerned for our citizens and those who have lost their homes,” Bach said.  “And I do plan to ask for cash,” he added.

Obama declared Colorado a disaster area to allow for the flow of federal dollars to help fight the Waldo Canyon Fire as well the High Park Fire, which has burned more than 87,000 acres in northern Colorado since it began on June 9.  Among the people whose lives are forever changed are Rebekah and Byron Largent.  They should have been celebrating their daughter Emma’s first birthday Tuesday. Instead, they fled their home. They thought they would be back in a few days and took only what they could carry: a few toys, clothes. Byron Largent listened intently to an emergency scanner and heard a firefighter say, “Majestic is gone.” Majestic is the name of their street. He braced himself for the worst.

He clung to his wife at Thursday’s meeting as they got the dreaded confirmation on a piece of paper that listed the 346 houses on 34 streets. Their rented house was burned to a pile of smoldering ash and rubble.  Gone are the wedding dress, the family photos and Rebekah Largent’s grandmother’s china.  “I looked at it and said, ‘We’ll be back in a few days,’ ” Byron Largent said of the china.  Also gone is the rocking chair where the Largents took turns over the past year rocking Emma to sleep.
“That’s the one we are both really, really distraught over, not having anymore,” he said. Brandon Hanson and his wife, Maria, were also at the meeting. They scanned the list of addresses; theirs was not on it.

“It was a big, big relief,” Hanson said.  But it was relief tempered by the sadness of people who were now homeless. “The entire neighborhood is gone. It’s like a war zone,” he said. “We are so lucky.” More than 36,000 people have fled their homes in Colorado Springs neighborhoods like Mountain Shadows and Peregrine.  Open Story: iReporters share their harrowing views of the wildfires  It was in Mountain Shadows where authorities discovered a charred body late Thursday inside one of the homes during a search for two people who were reported missing in the area. The second body was found in the same house Friday. Authorities made the discovery after a family had “inquired about the status of their loved ones,” police spokeswoman Barbara Miller said.  Help for wildfire evacuees and first responders Authorities also announced the arrest of two people accused of burglarizing a home left vacant by the evacuation order.

Belinda Yates, 38, and Shane Garrett, 36, were being held on suspicion of second-degree burglary, theft, possession of a controlled substance and other related charges, the Colorado Bureau of Investigation said.  Meanwhile, the cause of the Waldo Canyon Fire remains unknown.  The Denver office of the FBI joined agents from the Bureau of Alcohol, Tobacco, Firearms and Explosives, along with local authorities, in investigating reports that an arsonist may be responsible.  It could be mid-July before the fire is fully under control, the U.S. Forest Service said.  New app tracks Colorado wildfires -CNN