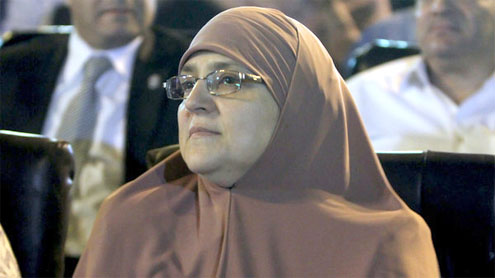 CAIRO: Egypt’s new first lady Naglaa Ali Mahmoud and her predecessor Suzanne Mubarak have at least one thing in common: Both have seen their husbands and sons detained in Egyptian prisons.

The similarities may end there though.The deposed President Hosni Mubarak’s wife was often criticized for being vain, self-important and strong-willed — propelling her son, Gamal, toward inheriting the presidency.But the wife of Islamist President-elect Muhammad Mursi is a conservative, religious Muslim who wears the Islamic veil and appears to be extremely modest. She does not even want to be called the first lady and rejects any accolades.

“I want to be called the president’s wife,” she told The Associated Press by telephone. “Who said that the president’s wife is the first lady anyways?”Instead, she said she prefers to be called Umm Ahmed, which means mother of Ahmed — her eldest son. It’s a moniker that some secular Egyptian elites might disdain as patriarchal.If she must have a title, she says, she would not mind being called “the first servant” of the people.

Her style so far could not be a more marked change in tone from the Mubaraks, who presided over massive corruption that enriched an elite cadre of businessmen and ruling party leaders while half the country of 85 million people struggled in abject poverty.Mursi and his sons, like many activists of the Muslim Brotherhood movement he belonged to, were imprisoned under the Mubarak regime during its three decades in power before it was overturned abruptly in last year’s popular uprising. The old regime banned the Brotherhood and persecuted, jailed and tortured its members as political opponents.

But now, as an Egyptian expression goes, the pyramid has been turned on its head.
The differences between the first ladies are symbolic of the sea change in Egyptian politics. Mursi is the country’s first freely elected president in modern history, the first civilian and Islamist to hold the office.And the 84-year-old Mubarak is in prison serving a life sentence for failing to stop the killing of hundreds of protesters during the uprising. His two sons Alaa and one-time heir apparent Gamal, were recently acquitted of corruption on a legal technicality, but remain in jail awaiting a new trial on charges of insider trading.

For the nearly three decades of Mubarak’s rule, roads were paved and flowers planted for Suzanne’s arrivals — sometimes just temporarily while she briefly visited a university or a park — at the cost of thousands of dollars.Umm Ahmed sought immediately to draw a clear distinction between herself and her predecessors, former first ladies Jehan Sadat and Suzanne Mubarak, both university-educated, impeccably dressed and coiffed and the daughters of British mothers.The 50-year-old, bespectacled Umm Ahmed has only a high school diploma and once worked in the US as translator from Arabic to English.

Under the glare of her newfound political fame, already her style of dress is being picked apart. The way she wears the headscarf has been deemed by elites as the antithesis of elegance. In fact, there is already a war of words on social media over her conservative, modest style which is shared by the vast majority of women in Egypt’s impoverished villages and towns.Her black abaya, or robe, is another mark of her conservative mores. It is same one worn by most female followers of the Muslim Brotherhood.

She does not wear make-up or paint her nails in line with conservative Islamic tradition.Still there has been little fear expressed publicly that for the first time, Egypt’s first lady will be wearing a headscarf and that this could lead to the Islamization of the public sphere in Egypt.Some of her detractors are not opposed to her wearing a headscarf, but more with her choice of headscarves — a long, sometimes blue or green scarf that drapes past her shoulders and is seen as a sort of Muslim Brotherhood uniform.

“I don’t have a problem with her hijab (Islamic headscarf). But I do have a problem that it is phosphoric green,” blogger Mahmoud Salem, a secular liberal, told the AP. He believes her image sends a message that this is what Muslim girls should dress like and will alienate Christians and Muslims who do not cover their hair.“At the end of the day, the first lady is diplomatically representing Egypt. We did not choose to make her a public persona. (The Muslim Brotherhood) made her a public persona” who will be scrutinized, he added.

Egyptians will be watching closely to see whether Umm Ahmed chooses to meet foreign dignitaries, attends conferences and other events with or without her husband, and changes her style for formal occasions. Another question is whether she will follow conservative Islamic protocol and refuse to shake hands or otherwise touch the opposite sex. Her husband defied those protocols this week, days after he was named president, when he was pictured shaking hands with women.

She may choose instead to take on a quieter role by getting involved in local charity projects and avoid international travel and high-level diplomacy.So far, Umm Ahmed has not completely shied away from the spotlight, as wives of rulers do in more conservative Islamic societies such as Saudi Arabia. She has given a handful of interviews to the media already and has met with the families of protesters killed in the uprising and made appearances at campaign rallies for her husband.

As is common in the Arab world, Umm Ahmed married her cousin, Mursi, at a young age — 17.
In an interview with the state-owned Nos Al-Donia, or Half the World, a magazine geared toward women readers, she said her ring and dowry were “simple.”“The financial situation wasn’t part of my calculations. … What pulled me to him was a sense that he was a responsible man who will protect me,” she said of her husband Mursi. “It is enough that when my parents passed away, they were very pleased with him.”

Less than two years after she married Mursi, she joined him in Los Angeles, California, where he was studying for a doctorate in engineering at the University of Southern California.Two of their five children — four boys and girl — were born in the United States, making them US citizens. She said the two have not returned, though, since they left as children.While in California, she worked as a translator for Muslim Americans and the young couple got involved in charity projects. It was then that they joined the fundamentalist Muslim Brotherhood.

Years later in Egypt, when Mursi was detained for eight months in 2008 for activity on behalf of the banned Brotherhood, she said she felt “inner peace” even though he was “the backbone of the household.”Multiple times, according to her interview with Nos Al-Donia, her home was raided and her sons interrogated and detained. During one of those raids, she said she advised her son just before his arrest to use his time in prison to relearn the Qur’an, Islam’s holy book, and memorize it again. She told him to consider it a political detention and something to be proud of.

“This is our life and our sacrifices that we endure and we will continue to give to our country until we feel dignity on this kind land,” she was quoted as saying.In the same interview, she described a regular family life, watching movies together at home and taking vacations to Egypt’s beaches.Fatema Abouzeid, a young Brotherhood activist, said she met Umm Ahmed in May for the first time and found her to be modest and social.“She is not arrogant and even when people would talk nicely about her husband, she would reply simply with ‘thank Allah’,” Abouzeid said. “I don’t want to compare her with Suzanne, but the major difference I could see is her manner with people. She was standing normally among people and speaking normally.”

Former Brotherhood lawmaker Azza Al-Gharf, who has known Umm Ahmed for the past five years, said the new first lady would sit among the crowds during her husband’s campaign rallies, nearly unnoticed and refusing special seating.Al-Gharf said what makes Umm Ahmed so different from her predecessor, Suzanne, is that “she is one of us” and has suffered the problems of many Egyptians.“She is a true Egyptian woman. She is standing by her husband with all devotion,” Al-Gharf said. “As the Muslim Brotherhood, we do not want another first lady for Egypt. We want a wife who stands by her husband, but who knows her limits.” – Arabnews