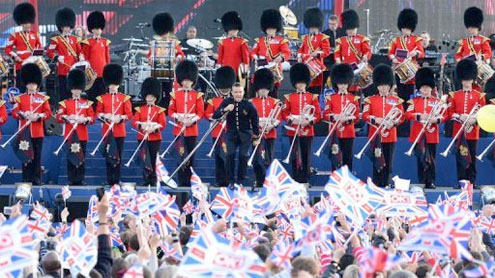 Queen Elizabeth II brought to a spectacular close a star-studded diamond jubilee concert which included a heartfelt tribute from the huge crowd to her ill husband Prince Philip.

The queen appeared on stage, after Paul McCartney had performed the final set, to light a ceremonial beacon, triggering a thunderous firework display seen by hundreds of thousands of spectators.Moments earlier, her son and heir Prince Charles took centre stage to celebrate the “life and service of a very special person”, drawing cheers from the crowd as he paid tribute to his “mummy”.Despite the informal good spirit of the occasion, the prince expressed regret over the absence of Prince Philip, who was earlier hospitalised with a bladder infection.

“The only sad thing about this evening is that my father cannot be here with us because unfortunately he’s been taken unwell,” he said.Charles urged the crowd to show their support, and they responded by raising a huge roar and singing “Philip, Philip”.Singer Robbie Williams kicked off the gala event on a giant stage in front of Buckingham Palace in London, and was followed by acts from throughout her 60-year reign including Elton John, Kylie Minogue and Stevie Wonder.

McCartney brought the music to a dizzying climax with a brief set of Beatles and solo classics.The crowd joined in as “Macca” ran through “Magical Mystery Tour”, “Let It Be”, a pyrotechnic-filled “Live and Let Die” and “Ob-La-Di, Ob-La-Da”, which had members of the royal box singing along.The singer later said he was proud to be part of “a fantastic spectacle”.”I don’t know why people think the British are so stuffy when the queen holds raging house parties like this,” he joked. “You feel quite honoured to come on and do your bit. We love to do our bit.”

The 86-year-old monarch, wearing a black and gold cape, arrived 90 minutes into the three-hour concert and was instantly greeted by cheers from a sea of revellers waving red, white and blue Union Flags.The queen smiled and waved to the crowd after reaching her seat but her appearance without the man who has been at her side for 60 years of duty brought a tinge of sadness to the moment.

Philip, who turns 91 on Sunday, will have to stay in hospital for several days, meaning he will also miss Tuesday’s service of thanksgiving and ceremonial carriage procession through London.”He is, understandably, disappointed about missing this evening’s Diamond Jubilee Concert and tomorrow’s engagements,” Buckingham Palace said.Comedian Lee Mack, one of the comperes, told the crowd that 250,000 people had turned out to watch the concert directly or on big screens erected on the road leading to Buckingham Palace, and Charles acknowledged the huge display of national pride.

“I was three when my grandfather king George VI died and suddenly, unexpectedly, your and my father’s lives were irrevocably changed when you were only 26,” he told the queen as he spoke on stage.”So as a nation this is our opportunity to thank you and my father for always being there for us, for inspiring us with your selfless duty and service and for making us proud to be British.”Charles, his sons Princes William and Harry, other royals and special guests including Prime Minister David Cameron moved to the music in the royal box, then stood to attention when the queen arrived.

Singer Grace Jones hula-hooped throughout her entire act while singers Tom Jones and Cliff Richard sang medleys of hits dating back more than half a century.One of the night’s most stunning sets was performed from the roof of the palace by Ska stars Madness, as vast moving images were projected onto the building’s facade.Dressed in a bright pink jacket, Elton John rattled through “Crocodile Rock” and “I’m Still Standing” while US soul legend Stevie Wonder adapted the lyrics of “Isn’t She Wonderful” in tribute to the guest of honour.

More than 10,000 people who won concert tickets in a ballot enjoyed a picnic in the Buckingham Palace gardens before the musical extravaganza to mark only the second diamond jubilee in British history.Excited picnicgoers began queuing outside the palace hours before the event.

“We’re going to be part of history, so we’re absolutely thrilled,” said Shani Hanson, a barmaid from Yorkshire in northern England who had pinned a Union Jack bow to her bottom and carefully painted her nails to match.

The contents of their picnic hampers were overseen by Michelin-starred chef Heston Blumenthal and included tea-smoked Scottish salmon; a chilled “country garden” soup made with plum tomatoes, mint and cucumber; cheese and biscuits; and strawberry crumble crunch.