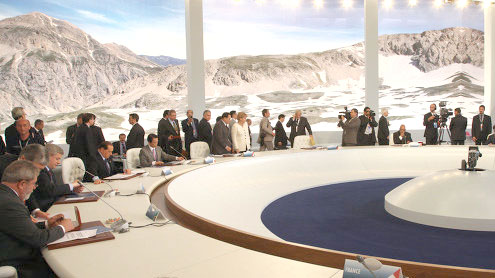 The G20 leaders are due to meet in France amid concerns the eurozone’s debt crisis may be worsening.

On Wednesday, eurozone leaders withheld the latest 8bn euro (£7bn) rescue loans for Greece until after its referendum on the package.At the same time, China refused to commit to the European Financial Stability Fund (EFSF) seeking more clarity on the Greece situation.The referendum is expected to take place on 4 or 5 December.German Chancellor Angela Merkel has said the vote was over whether Greece wanted to stay in the eurozone.

US President Barack Obama is scheduled to hold a meeting with the French President Nicolas Sarkozy on Thursday, where the two leaders are expected to discuss the eurozone crisis.Meanwhile, it has emerged that the UK is ready to support an increase in overall International Monetary Fund (IMF) funding for shoring up the euro.Greece prime minister George Papandreou has said that the referendum is effectively a decision on whether to stay within the single currency.”I do believe there is a wide consensus among the Greek people… and the Greek people will speak soon,” he said.

There has been widespread anger in Greece about the austerity measures such as public sector pay cuts and tax rises that have been demanded by the eurozone leaders as part of the new bailout agreement.The fear is that people may vote against the deal, a move that many feel may jeopardise efforts to resolve the debt crisis.

“The concerns about a disorderly default have risen,” Donald Hanna of Fortress Investment Group told the BBC. Many economists also fear that if Greece were to exit the euro, it could lead to financial contagion, as investors and ordinary bank depositors in other eurozone countries may fear that their own government will follow suit.”Portugal and Ireland may follow Greece and you could also see a rise in the cost of borrowing for economies such as Italy,” said Mr Hanna.Mr Hanna explained that if Greece opted out of the eurozone, it will have to introduce its own currency which may depreciate hugely against the euro.

Any such move, he warned will see the value of euro debt increase and may result in the bankruptcy of firms exposed to it.German Chancellor Ms Merkel said the eurozone leaders wanted Greece to remain a part of the group, but insisted that the Greek government’s decisions were threatening to destabilise the region.”The euro as a whole must remain stable,” Ms Merkel said. “We would prefer to ensure this with Greece rather than without it. But the top priority is stability.”

French President Mr Sarkozy added “there are rules that form the stability pact. It’s up to Greece to decide if they want to continue the adventure with us”.While the eurozone debt crisis initially started with the smaller economies such as those of Greece and the Republic of Ireland, the fear is that if not controlled in time it may affect bigger economies such as Italy and Spain.That in turn may hurt growth in the region and derail an already fragile global economic recovery.

Italy, whose debt levels are significantly higher than those of Greece, has hundreds of billions of euros in debts coming due for repayment over the next 12 months.However, it is finding it increasingly difficult to borrow money in the international financial markets.The country’s one-year cost of borrowing has risen to 5.1%, its highest since joining the euro, and far above the mere 0.3% interest rate that Germany must pay.The Italian cabinet agreed to new austerity measures demanded by other European governments at an emergency meeting on Wednesday evening, in a bid to ensure them that it was doing its part to cut its debt levels. – BBC