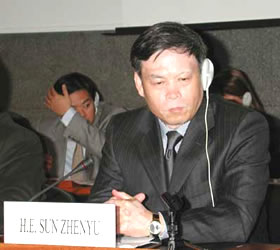 BEIJING: China’s ambassador to the World Trade Organization (WTO) urged Chinese exporters to boost product upgrade as the United States shifts its focus from labor-intensive goods to investigate imports of high-end products from China.Since the US Commerce Department announced a probe last month into China’s clean energy sector over so-called government subsidies, it is clear that the US is increasingly looking critically at China’s high-end products as part of its trade weaponry, Sun Zhenyu, China’s top envoy to the WTO, said.“China has become the major target of global trade protectionism and the US is a major user of trade remedy measures against China,” the China Daily quoted Sun Wednesday as saying.“While China’s labor-intensive goods remain a major target, recent evidence shows that the US has shifted to the value-added (high-end) goods. Chinese industry should keep a close eye on the new trend,” he said.Last year, the US initiated 23 cases worth $7.6 billion against China, while the cases worldwide targeting China during the same period were worth $13 billion. According to WTO statistics, more than half of US cases were directed against China in 2009.“In recent years, not only has the number of US cases (against China) grown substantially, but also the range of categories has expanded.This has aroused our strong concern,” Sun said.At the request by the United Steelworkers union, the US government initiated a Section 301 investigation into China’s clean energy sector including wind, solar, high-efficient batteries as well as new energy vehicles. A 301 investigation allows the US to sanction countries that indulge in what it terms unfair trade.In the face of increased US investigation, experts and industry associations have appealed to Chinese manufacturers to upgrade their products – App