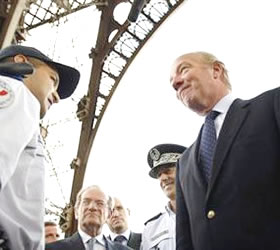 French Interior Minister Brice Hortefeux says Saudi Arabia has warned of an al-Qaida terrorism threat in Europe and against France in particular.Hortefeux told French radio and television Sunday that European intelligence agencies received the warning in the past few days.  He said the threat is real and that the government is on alert.Earlier this month, the United States, Britain, and Japan warned their citizens of possible terrorist attacks in Europe after Western intelligence officials uncovered a plot by al-Qaida-linked militants based in Pakistan for terror attacks in major British, French and German cities.
The officials said the attacks could be similar to the 2008 terrorist strike on Mumbai, India, where near-simultaneous attacks by Islamic militants killed 166 people and wounded many more – Voanews