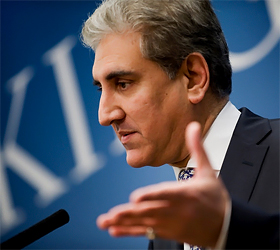 NEW YORK, Sept 21 (APP): Foreign Minister Shah Mehmood Qureshi has said Pakistan is determined to convert the flooding disaster into an opportunity to improve lives of the affected people and looked forward  to U.S. businesses’ support for the country’s recovery effort. He was addressing a gathering of chief executive officers of leading American businesses. Islamabad, the foreign minister said, will draw up an elaborate plan for reconstruction in the flood zones in the light of damages and needs assessment likely to be completed by mid-October. Qureshi also reaffirmed the Pakistani government’s resolve to use the national and international assistance transparently and efficiently. He said the Pakistani government has put in place an oversight body toward ensuring judicious utilizization of resources.

In this respect, he stated, a website is also being launched which will detail use of all flood aid.
The top Pakistani diplomat, who is heading the Pakistani delegation at the United Nations General Assembly session, also held out Islamabad’s pledge to raise additional local resources in support of flood recovery task in the months ahead. Detailing catastrophic losses of the still ongoing flooding tragedy, the foreign minister said the unprecedented natural calamity has submerged one fifth of the country’s land and afflicted around 21 million people.
The displacement of entire communities has exposed millions of children to waterborne diseases. Huge swathes of cropland have been damaged with severe repercussions on the country’s economic growth prospects.
While Pakistan will do all it can to rebuild lives and damaged infrastructure, the flooding catastrophe is too enormous for any one country to deal entirely on its own, he said. He praised the American contribution to flood relief effort and felt it was having a positive bearing on perceptions about the country – APP
Previous Post