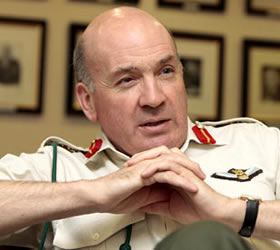 General Sir Richard Dannatt, the former head of the army, today unleashed years of bitter frustration at the way his troops were treated, accusing Tony Blair of lacking “moral courage” and Gordon Brown of being a “malign” influence by preventing the armed forces getting the funds they needed.

Damning criticism of his political masters, coupled with a stinging sideswipe at the present chief of defence staff, Air Chief Marshal Sir Jock Stirrup, appear in Dannatt’s memoirs, Leading From the Front. They reflect the turmoil at the heart of a defence establishment trying to conduct extremely difficult military operations in Iraq and Afghanistan during Labour’s later years .

Dannatt, extracts of whose memoirs appeared in the Sunday Telegraph, did not make life easy for defence ministers as he publicly criticised the handling of the invasion of Iraq and its aftermath soon after his appointment as head of the army in 2006. He accepted a job as defence adviser to David Cameron, then leader of the opposition, before he left the army last year. While he forfeited potential support and influence, Dannatt’s criticisms nevertheless reflect deep concerns expressed privately by many senior defence officials at the time and since his retirement. “If he felt so strongly why didn’t he feel it necessary to resign?” said Colonel Richard Kemp, a former commander of British forces in Helmand, southern Afghanistan.

Lord Guthrie, a former head of the army and chief of defence staff at the time of the Kosovo war, said: “Blair was supportive, Brown wasn’t. Blair did not deliver Brown.” The armed forces, and the army in particular, suffered because of the damaging clashes between Blair and Brown, Guthrie added.

“History will pass judgment on these foreign adventures in due course,” Dannatt wrote referring to Iraq and Afghanistan. He added: “But, in my view, Gordon Brown’s malign intervention when chancellor on the [1998 defence] review by refusing to fund what his own government had agreed fatally flawed the entire process from the outset. The seeds were there by sown for some of the impossible operational pressures to come.”

Dannatt continued: “Why didn’t Tony Blair resolve this problem … I was forced to the conclusion that he lacked the moral courage to impose his will on his own chancellor.”

Dannatt told the Sunday Telegraph: “To me it seems extraordinary that the prime minister, the number one guy, cannot crack the whip sufficiently to his very close friend apparently, his next door neighbour, the chancellor.”

He also warned the coalition government that continuing the present rate of causalities in Afghanistan – where more than 100 service personnel were killed last year – was unacceptable. “We’ve got to have cracked it by 2014/2015. You couldn’t ask an organisation to go on taking this level of causalities for 10 years.”

The Ministry of Defence announced that a soldier from the Royal Scots Borderers, serving as part of a reconnaissance force in Helmand was killed in an explosion today in the Nad-e-Ali district.

Dannatt commented in his memoirs that Stirrup was a fast jet pilot who “although brilliant at what he did, could not have been expected to understand the sights, sounds and smells or the battlefield”.

He added: “You don’t have time to pick up body parts and decide who lives and who dies when you’re in a cockpit flying at the speed of sound.”

Stirrup is to retire as chief of the defence staff next month after the conclusion of the government’s defence review. He will be succeeded by General Sir David Richards, who succeeded Dannatt as head of the army last year.

Sir Menzies Campbell, the Liberal Democrat’s foreign and defence expert, told the Guardian today: “However well founded [Dannatt’s] criticisms are, they will inevitably be dismissed as politically motivated.” However, he added: “The current defence review must clearly take account of the volume of evidence that British forces were poorly provided for in the first instance in Iraq and Afghanistan.” – Guardian