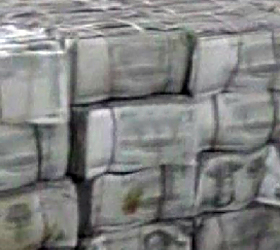 Mr Zhao, a businessman, dropped bundles of notes, none worth more than one yuan – about $0.15 – at the dealership in Jining, in northern Shandong province.

Extra staff had to be brought in to work shifts to count it all, a clerk at the dealership said.

Mr Zhao received the notes from customers at his printing business.

Finding a dealership to accept the notes, many of them stained and torn, was not easy, he said.

“I held onto the money waiting to see if they would accept it so that I could buy the car. The manager of this dealership decided to accept my cash, so that was really helpful to me,” he said.

After hours of counting, the staff at the dealership confirmed he had provided exact change.

“Our finance department originally had three or four people counting the money, but that was certainly not enough,” said Chen Ying, a cashier with the dealership.

“So we added some colleagues from the sales department, they came in the morning and worked all day, and then we added another shift. We finally finished counting all of the money.” – BBC