The Plus-Size Pakistani Woman Exists, and now She’s Speaking up 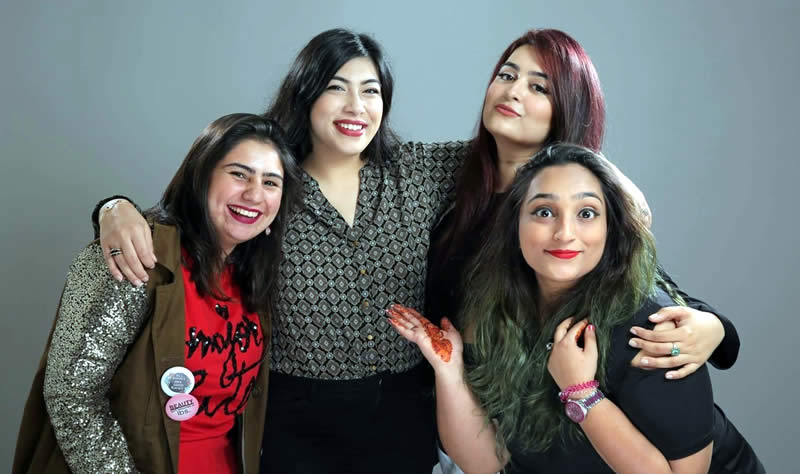 “‘Moti bhaag gayee’ (the fat girl ran away) said my P.E. teacher when I asked him to excuse me for a washroom break,” remembers MBBS student Zehra Husayn. She was only eight years old at the time and those words stung.

Body image, or how a person perceives their body and the way it appears to others, is largely shaped by what we see is acceptable around us. Our beauty standards are influenced by the barrage of images and messages we absorb through mass media. Thin women dominate TV screens, Instagram feeds and fashion spreads all over the world including Pakistan, perpetuating the notion that only thin should be seen as beautiful.

This narrow perception of beauty leads to feelings of inadequacy among people judged to be fat or overweight as well as the common practice of humiliating them for their size.

While the west is slowly growing sensitised to issues like fat shaming, it’s obvious that Pakistan has a lot of progress left to make.

For her part, Zehra founded the Facebook group Plus Size Pakistan – Xera | Curvy & Co (PSP) in 2015. “Growing up my confidence had been shattered. I worked on it little by little by reminding myself every single day that I am worthy, beautiful and confident.”

She hopes PSP will help other women make the same mental and emotional journey. Currently comprising a membership of about 1200 women or so, PSP is a “highly exclusive” Facebook group that is intended to be a body-positive platform for plus size Pakistani women to collectively nurture their confidence and resolve their body image issues — all while keeping their struggles confidential.

“The struggles of a plus-size person can be better understood by people in the same boat. Many of my plus-size friends aren’t happy with their bodies. Since attitudes are contagious, this group changes that by encouraging women to accept and love themselves,” says PSP member Yumna Sadiq.

But there’s plenty to complicate the struggle to attain that goal.

The media’s concept of an ideal woman isn’t stagnant. Over the years we can see drastic changes in the most loved female body shape; from the figure 8 in the early 1900s achieved by the never-ending struggle with a corset to the hourglass figure in the mid 1900s to the latest bootylicious bod a.k.a the Kim Kardashian trend.

According to actor Noor Bukhari, the preference in Pakistan has shifted from curvier bodies to leaner, more angular bodies over the years due to foreign influences.

“Saima was a megastar back in the ‘80s and she was on the bulkier side,” says Noor as she recalls how Shaan had advised her to eat up when she entered the industry as a skinny 20-something. “I think when India started introducing models as heroines, our perception of the perfect body changed.”


How fat shaming begins at home

Rabiya Mumtaz, a registered UK-CPCAB (Counselling and Psychotherapy Central Awarding Body) mental health counsellor, has identified that overweight girls tend to get bullied and fat-shamed without a second thought to how impressionable their age is. “A lot of fat shaming starts at home within families,” Rabiya tells Images, based on her client experiences.

This is where children can develop low self-esteem and anxiety, and the signs can be seen in their posture, like a slouch or folding their arms in front to cover their body, she shares. This trickles down into the child feeling ‘not good enough’ and the consequent drop in self-esteem.

Your weight decides your future

As girls step into womanhood they are further frowned upon and have a hard time finding jobs and life partners.

Muneeza Khan, an artist and also a member of PSP, says she has faced issues with marriage proposals:“I often hear I’ll never get married because I’m fat. I wouldn’t want to marry someone shallow enough to categorise my weight as the only criterion for marriage.” 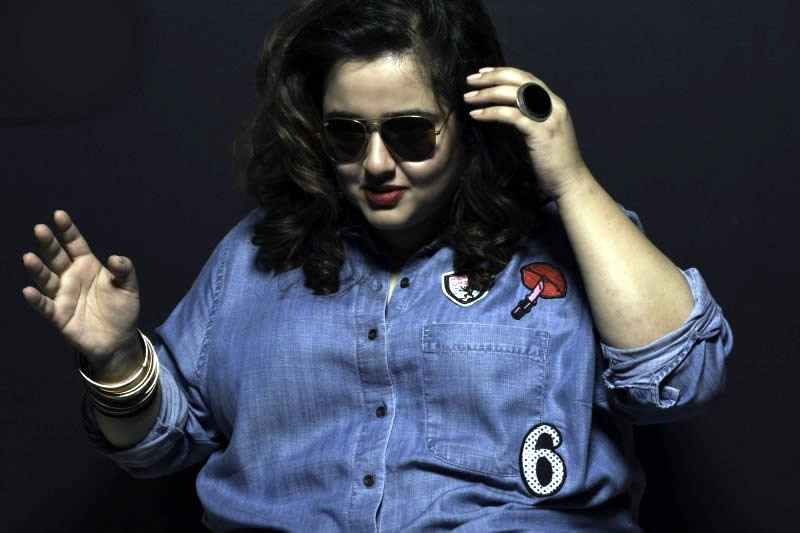 A fat girl isn’t considered good wife material in Pakistani society, says stand-up comedian Faiza Saleem. “Firstly she doesn’t look great so ‘log kya kahain gay’ and secondly because her health might affect her having a family later.” She thinks that health concerns may be valid but women of all sizes struggle with conceiving children, “it is not a plus size-exclusive issue.”

Fashion blogger Hadiyya Javed thinks she is a living example of just how false these misconceptions are. Even though she is a plus size woman, she claims to be very active, “When I wasn’t married people pointed out my weight. I got married and had a healthy baby soon after,” shares Hadiyya.

The enormous pressure to live up to the beauty standards is not only damaging to one’s mental well-being but also physical health.

The fear of gaining weight has led to the popularity of many restrictive diets that cause nutritional deficiencies and other health problems.

Muneeza Khan fought with an eating disorder for some years while she was trying to lose weight. It was only after her health started deteriorating that she realised her mental and physical health was more important than her physique, “I became anaemic and had a severe vitamin D deficiency, which I am still coping with,” she said.

Fareeha Jay, a dietician based in the UK, emphasises that plus size people aren’t unhealthy by default.

Regular sized people can also be extremely unhealthy due to reasons ranging from nutritional deficiencies and lack of exercise to underlying health conditions.

Fareeha asserts that the rules made by a society where people are put in categories of plus sized and regular sized based on their weight is in no way an indicator of a person’s state of health, “There is no such thing as a perfect body”.

While mass media largely continues to perpetuate narrow conceptions of beauty, women like Zehra in their individual capacities are chipping away at those monolithic ideals.

Gul E Zahra Mirza, who has been running the Instagram blog Fanny’s World since 2011, says fashion blogging has been a serious challenge, “Incorporating trendiness with my own sense of style, keeping things modest but stylish, finding the right style for my body type, were some of the many hurdles I faced.” 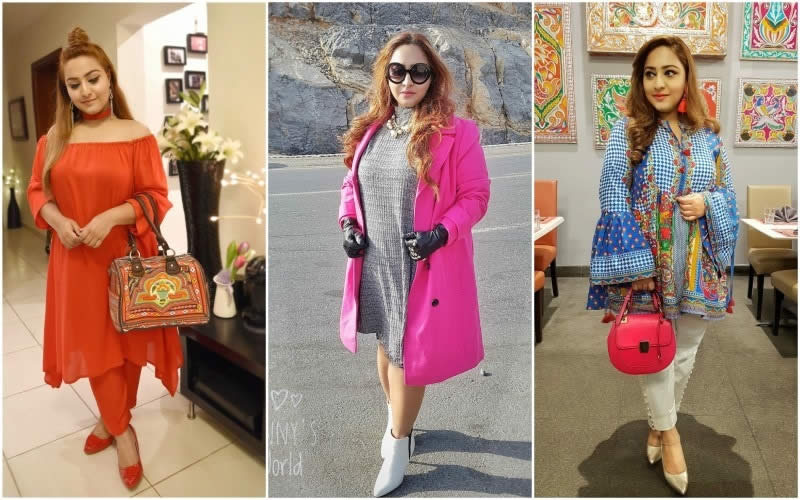 Lahore-based fashion blogger Hadiyya Javed says she started blogging because she saw the dearth of plus-sized models in the fashion industry. She agrees that the fashion industry currently does not cater to the needs of the average Pakistani women, “No designer or brand caters to the a wide enough range of sizes,” she affirms. She also maintains that no fashion/style magazine features curvier models or public figures as style icons in their editions, “Can’t heavy girls be fashionable or stylish?” she asks.

The only fashion label we’ve seen actively engage in the global conversation about body sizes is Generation, whose recent campaign #GreaterThanFear brought to the fore non-models as they addressed serious questions like: “Am I too big to wear something like this?”… “Will others like this colour on me?”… “Am I too old or too young for this cut?”

In the process of over-thinking what one would look like in a particular outfit we forget the major question, “What do I want to wear? “The clothes we put on our backs tell a story, about which we are, our fantasies, our dreams and our eccentricities,” maintains Khadija Rehman, Creative Director at Generation.

Interestingly the idea for the campaign originated from a social media query, ‘Who wears these clothes? Research revealed that their customer profiles were diverse, ranging from friends to strangers, teen to the elderly, some of whom signed on to become the ‘Faces of Generation’.The campaign eventually featured 20 non-models for the range of sizes from 6 to 16.

Amina modelled for Generation recently but they never labelled her as a plus size as she modelled for their regular size range i.e. size 14, while plus sizes are considered size 18 and above. “It just the industry’s viewpoint of what is regular size is so narrow that it considers anyone over size 10 plus size and that is incredibly unfortunate,” said Amina who was approached by a friend to model for Generation’s campaign.

“The industry’s viewpoint of what is regular size is so narrow that it considers anyone over size 10 plus size. That is incredibly unfortunate.” — Amina, model for Generation’s #GreaterThanFear campaign

With a love for dance and ghararas and with a deep-rooted sense of confidence about her physique, Amina too grew up being body shamed but realised that the problem is not hers, “I’ve wasted a lot of time mulling over the way I looked and my size and it stemmed from all aspects of my life,” she said.

After moving to Toronto for her studies she realised nobody cared she was different there and that changed her for good. 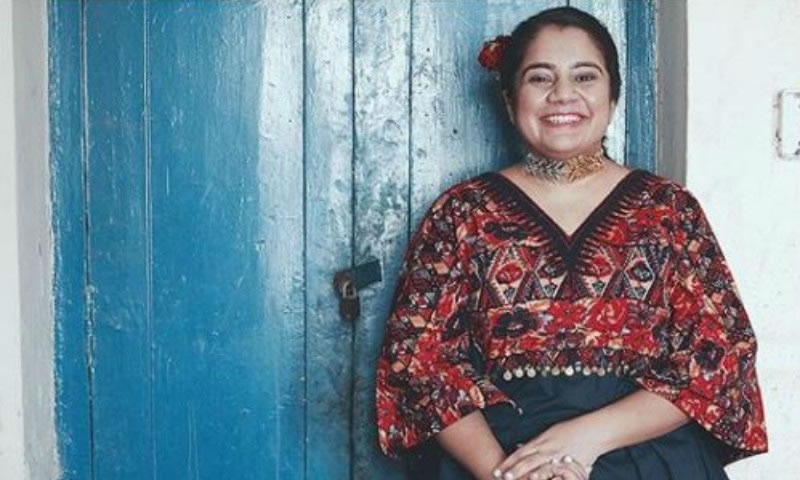 Generation claims that as a retailer they are offering the biggest size set to the Pakistani customer, size from 6 to 16. From the large seam allowances to loose easy to wear silhouettes, they feel their larger sizes have existed since forever.

Khadija thinks that a lot of plus size women refrain from having fun with their clothes, “which is tragic. If you love ghararas, wear them and enjoy them,” she said while giving out tips to the plus-sized beauties of Pakistan, “They just need to develop more swagger in their walk and not worry so much what others would think. So my fashion tip is to dress up, go out and smell the roses!”

“I realised plus size acceptance is neither a movement to eat whatever you want nor is it about placing restrictions. It’s about being kind to your body and realising you are not defined by the size of your waist,” Amina echoes the thoughts of the many women who feel excluded from the society.

“Women approach me all the time, telling me how I’ve inspired them to get out of their shells. Sadly, I’m an exception with a handful of others,” said Faiza Saleem.

These few emerging bloggers, celebrities and icons embracing their curves are willing to be the change we never thought we needed and are putting haters to shame.