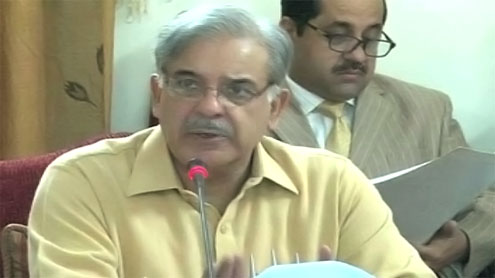 LAHORE: The Punjab government will set up engineering and agriculture universities in Multan, and Danish Schools in Lodhran and Mailsi, Chief Minister Shahbaz Sharif said on Thursday.

He was talking to senators and assembly members from Multan. Speaking to the participants of the meeting, Shahbaz gave approval to several development schemes in the Multan division, while the pace of implementation of uplift projects, law and order and budgetary proposals were also discussed. He said that health and education sectors were among the top priorities of the government and huge resources were being spent on the provision of better health and educational facilities to the masses.

The chief minister said that it was for the first time in the history of the country that mega projects had been executed in the far-flung areas of south Punjab on a priority basis.He said that planning had also been done to launch a modern ambulance service in the rural areas of south Punjab from next year on the pattern of Rescue 1122.“Good governance, transparency and merit policy in Punjab has provided relief to the people, while the common man is benefiting from welfare programmes such as Ashiana, yellow cab, self-employment and laptops schemes,” he said, adding that the public service and provision of basic amenities to the people would continue in the future.

He said that corrupt rulers had looted development funds in the name of uplift projects. “These elements have been exposed and will be held accountable by the people, while the looted money will be recovered from thieves and plunderers, and utilised on the welfare and betterment of the masses,” he said.He said that state land was being retrieved from qabza mafia in Multan and development projects were being executed on the recovered land. He also directed the officials concerned to retrieve Amirabad Park in Multan from land grabbers within 48 hours.

The CM issued instructions for the formation of a cabinet committee to review the matters regarding the land of the Punjab government which was on lease to British Cotton Growers and Roberts Cotton Association in Khanewal, and said that the committee should submit its report within a month.He said that the culture of optimal utilisation of funds, financial discipline, transparency and austerity had been promoted in Punjab, and solid measures had been taken for the maintenance of law and order, protection of life and property of people and provision of justice to the aggrieved. – Dailytimes

US commandoes rehearsed Abbottabad raid at ‘Camp Alpha’ in Bagram

US commandoes rehearsed Abbottabad raid at ‘Camp Alpha’ in Bagram