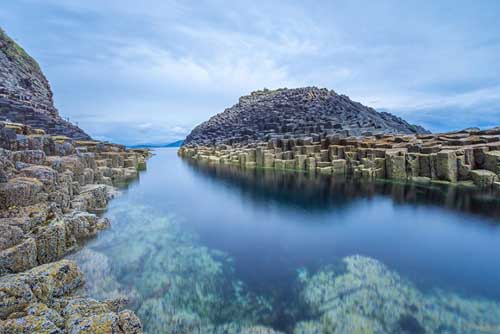 Scotland has got way more going for it than just kilts and bagpipes. The country is seeping in history and has miles upon miles of gorgeous landscapes.

It’s home to a relatively diverse terrain, complete with tall mountains, several islands, sea-side cliffs, and lush forests. The geography makes for an absolutely stunning country and a perfect setting for photos, as you can clearly see below.

The Quiraing is a landslip on the Eastern face of Meall na Suirmach on the northernmost summit of the Trotternish Ridge. It’s the only part of the slip that is still moving.

This legendry train is also known as the Hogwarts Express Train, as it was used in the Harry Potter movies. The line winds through gorgeous settings, including highland valleys and besides lochs.

Kilchurn castle sits on a rocky peninsula on the northeastern end of Loch Awe. During periods of higher than usual levels of water, the site becomes an island.

4. Rannoch Moor in the valley of Glen Coe

This large expanse of boggy moorland, west of Loch Rannoch, is notable for its wildlife.

As one of the finest ridge traverses in Britain, Trotternish Ridge offers some unsurpassable views.

This sea cave can be found on the uninhabited island of Staffa. Its unique structure is formed by hexagonally jointed basalt.

A stunning bluebell path can be found in Perthshire. In the spring, the woodland floor turns into a carpet of blue.

The Isle of Sky is the largest island in the Inner Hebrides of Scotland. Its rocky slopes provide some of the most dramatic mountain scenery in the country.

This ruined medieval fortress lies on a rocky headland on the north east coast of Scotland. The ruins span over 3.5 acres and are surrounded by steep cliffs that drop into the North Sea.

Also known as the Devil’s Pulpit, Finnich Glen is about 30 minutes away from Glasgow. According to local lore, the gorge used to be used by druids as a secret meeting place.

This freshwater loch lies to the West of the village of Aberfoyle. It’s fed by several small streams.

Kilt rock is sea cliff in east Trotternish that, as its name suggests, is said to resemble a kilt.

13. Fall in the Scottish highlands

Gorgeous fall hues color the land in the autumn, tinging the Scottish highlands with oranges, yellows, and reds.

14. Scenic bridges straight out of a fairy tail

There are many rustic-looking bridges in Scotland that seem like they jumped straight out of the pages of a fairy tale.

15. Rock formations on the island of Staffa