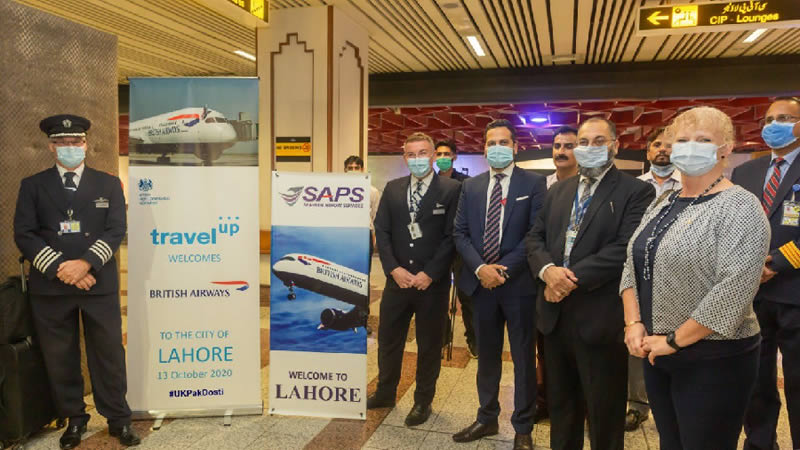 British Airways has resumed its direct flight operation to and from Lahore as the airline’s first flight touched down at the Allama Iqbal International Airport on Tuesday after a gap of nearly 40 years.

The flight, BA-259, with 214 passengers onboard took off from the Heathrow airport and landed at the Lahore airport earlier in the morning.

A cake was also cut in CIP lounge to mark the resumption of the British airline’s flight operation.

The airport manager and other CAA officers were present on the occasion to welcome the passengers who arrived there via the British carrier’s first flight. The flight will fly back to London with more than 200 passengers on board.

British High Commissioner to Pakistan Christian Turner tweeted that British Airways used to operate to two cities in Pakistan but after 40 years, the airline has resumed its operation to another city, Lahore.

FM Qureshi while speaking to Turner said Pakistan is desirous of further promoting trade partnership with the UK. “Both the countries enjoy deep and longstanding bilateral relations.”

Alluding to the Indian atrocities in Indian Illegally Occupied Jammu and Kashmir, the foreign minister urged the international community to play its role for the resolution of Kashmir dispute as per the UN Security Council resolutions.

The UK diplomat commended Pakistan’s conciliatory efforts for peace in Afghanistan and also appreciate the country’s strategy against Covid-19.

The two sides also held discussion for promotion of cooperation in the areas of climate change, education and tourism.

Pakistan sets Five Preconditions for Resumption of talks with India

Efforts Against Islamophobia to Continue: PM

Efforts Against Islamophobia to Continue: PM