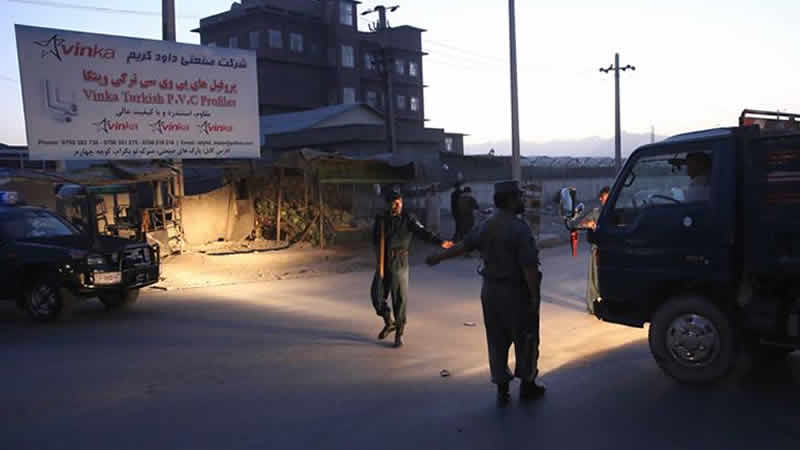 A Taliban attack on a Kabul hotel housing foreign contractors ended Monday after all three Taliban fighters were killed, around seven hours after the assault began, police said.

“The operation is over now. One policeman lost his life and three others were wounded but none of the hotel staff or guests were hurt,” Kabul police chief Abdul Rahman Rahimi told reporters. A massive Taliban truck bomb struck a hotel for foreigners on the outskirts of Kabul early Monday, officials said, just days after the deadliest attack in the Afghan capital for 15 years. There was no immediate word on casualties from the powerful bombing, which occurred close to a military base next to Kabul’s international airport, and rattled windows several kilometres (miles) away. The attack on Northgate, a heavily guarded compound for foreign contractors which was previously attacked in July 2013, underscores the worsening security situation as the Taliban ramp up their annual summer offensive.

A truck packed with explosives struck the entrance of Northgate,” an Afghan security source told AFP, without offering any further details. Taliban spokesman Zabihullah Mujahid said insurgents armed with rocket-propelled grenades and other weapons blasted their way into the compound after the truck bomb went off. He claimed that more than 100 “American invaders” were killed and wounded in the assault, which began around 1:30 am (2100 GMT Sunday). The Taliban are routinely known to exaggerate the toll from their attacks.

Afghan commandos cordoned off all arterial roads leading to Northgate, with erratic grenade explosions and gunfire coming from the scene after daybreak, local TV station Tolo said. It added that NATO special forces were overseeing the clearance operation at the Northgate, a luxury enclave which had been fortified with blast walls, watchtowers and sniffer dogs. The hotel was not immediately reachable by telephone. Tremors from the powerful explosion, which was preceded by a power outage, were felt across the city. The assault comes as the Taliban ramp up their annual summer offensive after a brief lull during the holy fasting month of Ramadan, which ended in early July.