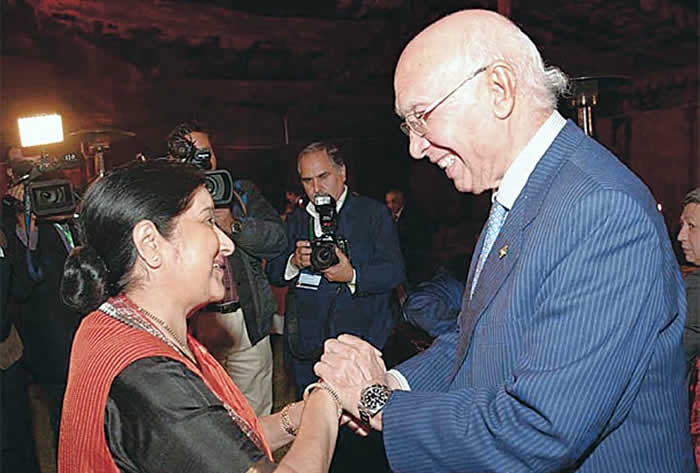 “I will meet Prime Minister Nawaz Sharif and my counterpart Sartaj Aziz. We will talk about improving and taking forward the relations between the two countries,” she said in a statement soon after landing in Islamabad.

About the conference, she said: “Heart of Asia conference is very important for India because it is associated with Afghanistan. That is why I have come here to participate.” She was received at the airport by Foreign Office officials. Besides Ms Swaraj and hosts Pakistan and Afghanistan, the event is being attended by seven other foreign ministers from the region, including Iran and China. Ms Swaraj is the first Indian minister to visit Pakistan since the BJP came to power last year and the tense bilateral relations became further stressed.

In March, Indian Foreign Secretary S. Jaishankar visited Islamabad as part of his tour of Saarc countries. The last visit by any Indian external affairs minister to Pakistan was in September 2012 when S.M. Krishna came here for a ministerial review meeting of the bilateral peace dialogue and co-chairing a plenary session of the India-Pakistan Joint Commission. India is part of the Heart of Asia process, but Ms Swaraj’s visit was made possible because of an ice-breaking meeting between Prime Minister Sharif and his Indian counterpart Narendra Modi in Paris on the sidelines of the Climate Change summit. The brief meeting was facilitated by the UK. The national security advisers of Pakistan and India later met in Bangkok on Sunday to follow up on the discussions between the two prime ministers and to convey to each other their concerns.

The process that started after the Paris meeting is the fourth attempt at normalising the ties since Mr Modi became the prime minister. All three previous attempts failed. Ms Swaraj looked cautious about the outcome of her meetings with PM Sharif and Mr Aziz. “Since it (Heart of Asia ministerial meeting) is happening in Pakistan it is necessary and appropriate for me to meet Prime Minister Nawaz Sharif and hold talks with my counterpart Sartaz Aziz to talk about improving the bilateral ties and take them forward,” she said. “What happens during the talks will be known after the meeting,” she added.