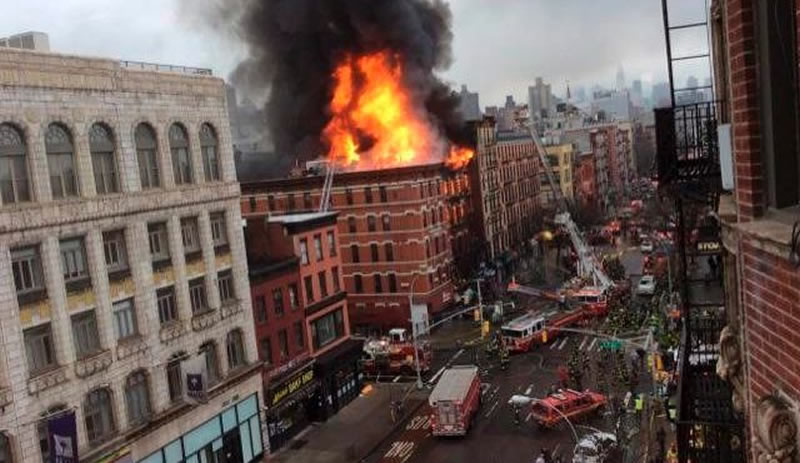 Construction workers inside a sushi restaurant in the East Village accidentally hit a gas line, causing an explosion that injured 19 people,

The explosion inside 121 Second Ave., between East 7th Street and St. Marks Place, caused the buildings at 121, 123 and 119 to collapse after they became engulfed in flames, according to city officials. No. 125 was still burning Thursday evening. The approximately 250 firefighters on the scene have managed to contain the 7-alarm fire to those four buildings, and are expected to stay “for a very long night,” said Fire Commissioner Daniel Nigro. “The initial impact appears to have been caused by plumbing and gas work that was occurring inside 121 Second Avenue,” said Mayor de Blasio at a news conference Thursday evening detailing the explosion that injured at least 14 civilians and five emergency res ponders.

Officials say four of the civilians were critically injured, and seven others had minor to non-life threatening injuries. Three others were evaluated on the scene and didn’t need medical attention. The most critical patients have respiratory burn, according to officials, which is different from smoke inhalation and is caused by the inhalation of hot gas or burning particles that result in tissue damage to the respiratory system.