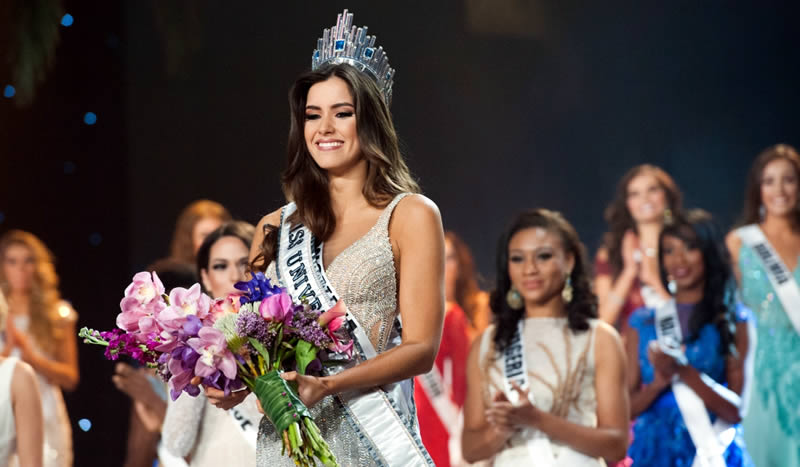 The 22-year-old model and business student triumphed over 87 other women from around the world, and is only the second beauty queen from Colombia to take home the prize.

The last time Colombia won the crown was in 1956 when Luz Marina Zuluaga took home the title. Vega, wearing a long silver sequined gown, was beaming and tearful as she accepted her sash and crown from reigning Miss Universe, Venezuelan Gabriela Isler. She edged out first runner-up, Nia Sanchez from the United States, hugging her as her win was announced. Vega spoke proudly of her country, and said in the question round Colombia “has been a role model for the rest of the world.” “We are persevering people, despite all the obstacles, we keep fighting for what we want to achieve. After years of difficulty, we are leading in several areas on the world stage.”

Vega won highest possible score of 9.9 in every presentation at the Miss Universe Colombia contest, according to the pageant s website. The five-foot-nine (180 centimeter) model from Barranquilla is the granddaughter of legendary tenor Gaston Vega and 1953 Miss Atlantico, Elvira Castillo. She beat out Ukraine s Diana Harkusha, Yasmin Verheijen from the Netherlands and Miss Jamaica Kaci Fennell, who were also top five finalists. The 63rd edition of the Miss Universe pageant, held at Florida International University, geared up with the traditional parade of eye-catching national costumes before a full house of enthusiastic fans. Ten judges were tasked to select this year s winner, including Cuban-American music mogul Emilio Estefan, Cuban soap opera star William Levy and Philippine boxing great Manny Pacquiao. The event is actually the 2014 Miss Universe pageant. The competition was pushed back until now to try to get a bigger television audience.

The contest, owned by Donald Trump, is watched by about 600 million worldwide, pageant officials say. There was some criticism of the $2.5 million contribution that the city of Doral made to the pageant, as local politicians were divided over whether the promotion for the city near Miami is worth that money. The Miss Universe contest started out in 1952 as a local “bathing beauty” competition organized by a swimwear company in Long Beach, California. Today, the competition is more than a beauty pageant and contestants “compete with hope of advancing their careers, personal and humanitarian goals and… seek to improve the lives of others,” according to the Miss Universe website.