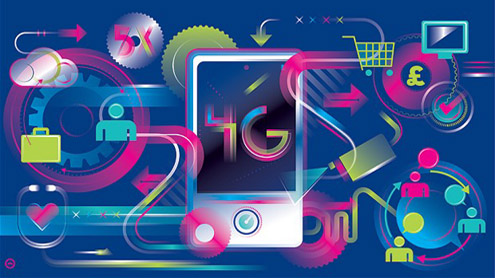 The auction of next generation 3G and 4G licences is expected to fetch the national exchequer $1.3 billion and create employment opportunities for about 100,000 people, Finance Minister Ishaq Dar said on Wednesday.

“We are satisfied by the response from cellular service providers,” the finance minister said a press briefing convened to discuss his visit to Washington DC and the successful launch of Eurobond. In the budget for financial year 2013-14, Dar said the government had expected to raise $1.2bn from the auction. Three 10 MHz 3G licences and two 10 MHz 4G licences will be auctioned on April 23. There was no bidding for the unused licence of the now-defunct Instaphone.

“We may offer this for bidding at a later stage,” the minister said. He said the base price of the five licences was expected to be over $1.3bn, as opposed to the previous government’s attempts to auction them at a base price of $750 million to $800m. In addition, Ishaq Dar claimed, the licence fee would also be recovered from successful bidders far more quickly. Each licence will be valid for 15 years, but the licensing fee will have to be paid by successful bidders within five years. Moreover, a minimum upfront payment of 50 per cent is mandatory for each licensee, while the rest will be paid in five equal instalments, spread over five years with interest rate at KIBOR plus.

The base price for 3G licences is set at $295m and that for a 4G licence is $210m. The minister explained that 3G licensees could also acquire 4G licences in the future after paying an add-on fee, since 4G is more state-of-the-art. The finance minister heads the Spectrum Auction Advisory committee constituted to carry out groundwork for the auction. “I have written to the prime minister asking for the dissolution of the committee”, the minister said, adding that it had nothing to do with the auction anymore. “It is now the responsibility of the Pakistan Telecommunication Authority (PTA) to hold the auction in a transparent manner,” he said.

Meanwhile, a sub-committee of the Senate Standing Committee on Information Technology will meet on Thursday to report on the ruling of the main committee, which had already recommended the government to halt the auction of 3G and 4G licences until all PTA members had been appointed. Last week, the committee chairman, Mohammad Idrees Khan Safi, asked the information technology ministry to appoint a Member Compliance and Enforcement. He believed that any action/activity carried out without filling the post first would be ‘illegal’. However, the recommendations of this sub-committee are non-binding for the government. -Dawn