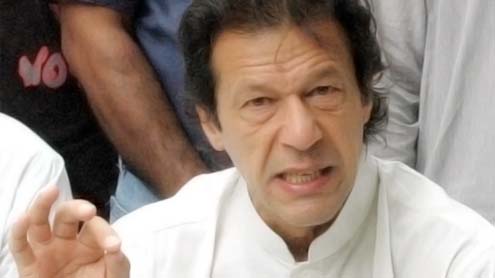 PESHAWAR: Pakistan Tehrik-e-Insaf (PTI) Chairman Imran Khan, while launching free health treatment service in Khyber Pakhtunkhawa, said that KPK would soon be a role model for other provinces in good governance and provision of other basic facilities.

“The entire country has focused on the KPK governance but the day is not far when Punjab, Baluchistan and Sindh will follow KPK,” he remarked while addressing the inaugural ceremony of the free emergency services at the Peshawar Lady Reading Hospital here on Wednesday. He was flanked by KPK Chief Minister Parvez Khattak, Provincial Information Minister Shaukat Ali Yousafzai and a large number of MPAs and party workers.

Khan said provision of free medical treatment to poor patients is his longstanding desire. He said Shaukat Khanum Memorial Cancer Hospital provides free of cost medical facilities of worth three billion rupees per year and this is his desire that state-run hospitals should also provide health facilities like Shaukat Khanum Hospital.

He said all the hospitals would be made independent in their decisions and no one will be allowed to interfere in the hospitals’ system on the basis of nepotism and favouritism. He said PTI government is bringing a unique system of local government which would be different from other provinces and through this system powers would be devolved to tehsil councils and village councils. He vowed that government is installing CCTV cameras at all police stations through which the Inspector General of Police will observe the overall efficiency and illegal confinement of police. He said through an independent accountability commission, the corrupt elements would be brought to justice.

He asserted that despite threats, the PTI government has eliminated protocol culture in Khyber Pakhtunkha that is a real change. He said no one can prove corruption against any PTI minister in the last three months. He said soon new projects in tourism sector would be launched and ferry services in River Kabul and Indus would be launched through which the tourists will enjoy different scenes. “We are searching and promoting new tourist sites through which the KPK government will generate income,” he maintained. He said in these tourist spots youth would organise racing competitions and running competitions which would really entertain the tourists.

“We have directed the Ministry of Environment to discourage deforestation and take steps for improving the forest sector to keep the environment healthy,” he added. He said a youth centre would be established in each division along with an advisory council who will deal problems relating to youth. The chairperson said the main function of centres would be organising speech competitions, seminars and workshops besides promoting other healthy activities. He said more than 69 stadiums in different tehsils would also be established. – TheNation