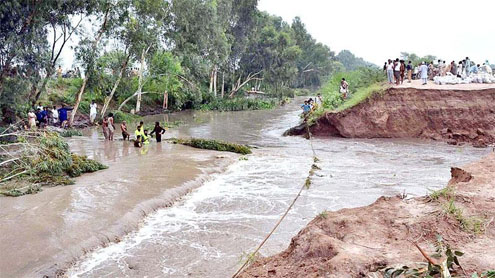 LAHORE/ISLAMABAD: The Indus and Chenab rivers were in high flood on Friday at a number of points after heavy rains lashed Punjab continually over a period of 48 hours from Wednesday night.

According to government officials, 98 people have died in flood-related accidents over the past fortnight, mainly in urban areas, while more than 100,000 persons have been affected.Flood warning centres have forecast more rains for Lahore and Rawalpindi divisions. Rains could be very heavy at times in places along the border with India or India-held Kashmir, according to the Met office.The office has forecast scattered thunderstorm and rain with heavy falls at isolated places in Rawalpindi, Lahore, Gujranwala, Faisalabad, Sargodha, Sahiwal, Multan, Bahawalpur, D.G. Khan, Kalat, Zhob, Nasirabad, Sukkur and Larkana divisions along with Kashmir, Khyber Pakhtunkhwa and Gilgit-Baltistan.

The rain system is likely to weaken over the weekend. It is right now centred over the Indian side closer to Pakistan from Lahore to Rawalpindi divisions and Kashmir.The Indian side is going to have `high to very high rains’ and Pakistani areas closer to the border may directly bear the brunt,” said Flood Forecasting Division’s chief Riaz Khan.It rained throughout the day in Lahore on Friday. Riaz Khan said that rain spell is likely to prevail in Lahore in the next 24 hours and it may be heavy in areas bordering India.According to the FFD, the River Indus at Chashma and River Chenab at Marala, Khanki and Qadirabad are in high floods.

The River Indus at Guddu is likely to be in high flood on Aug 20 and 21, as 600,000 to 650,000 cusecs water is likely to pass through this area, while there would be high flood at Sukkur between Aug 21 and 22.The water level at Ravi at Shahdara is rising and it is likely to be in medium flood at this point in the next 24 hours because of expected rains over its lower and upper catchments.The tributaries of the rivers Ravi and Chenab in the Sialkot region are also likely to be in `high to very high’ flood during this period.“The rivers Ravi and Chenab may again swell at their starting points in view of likely heavy rains over their catchments,” Mr Khan said.

Meanwhile, from 8am to 5pm, Bahawalnagar and Bahawalpur Airport received 58mm of rain (each), Gujranwala 57, Sahiwal 36, Sialkot Cantt 32, Okara 31, Lahore Airport 23, Lahore city 9, Faisalabad, Jhang and Sialkot Airport 8 (each), Padidan and Kakul 4(each) and Chakwal.

The next spell of rainfall not only in Pakistan, but also in Afghanistan or catchments of rivers coming from India could be serious to catastrophic as all the reservoirs are fill to the capacity in country.“Even land has no capacity to absorb water anymore due to recent strong spells,” said Asjad Imtiaz, chairman, Federal Flood Commission.“We still have time to prepare for the upcoming danger as the next spell is predicted for Aug 27-28,” said Mr Iqbal at a meeting convened by the Planning Commission.The meeting was told that the total water availability in the three major reservoirs of the country was 12.42 MAF which was 6.34 MAF in the second week of August last year.

Out of capacity of 6.58 MAF, Tarbela was currently holding 6.41 MAF water, Chashma was also short of high flood, while Mangla was having a huge remaining capacity of 2.72 MAF.“The major threat was coming from Rivers Kabul and Swat in the west, while the Indus river was also facing medium to high flood,” chairman FFC said, adding that threats persist at Nowshera. The KPK government has to be careful in coming days.Similarly, the met office informed that another spell in the East would bring massive inflow at Ravi, Chenab and Sutlej as all reservoirs in Indian Punjab were filled to capacity.

“We are keeping an eye at the rains in the Indian side,” said DG met Hasra Mir.The meeting was informed that due to timely intervention and preventive measures, limited damages have been caused despite high floods at river Sutlej in recent days.“It was mainly because of timely and coordinated efforts of NDMA and the Punjab Government, said NDMA chairman Maj-Gen (retd.) Mohammad Saeed Aleem.

“It is imperative that all agencies and departments work in coordination with each other, otherwise we will knot be able to meet this challenge,” he added.The meeting was told that country suffered losses worth $16 billion due to floods in the past three years.The NDMA has estimated that around Rs16 billion was needed to meet the requirements in current floods and the rehabilitation cost would be shared with the provinces. – Dawn