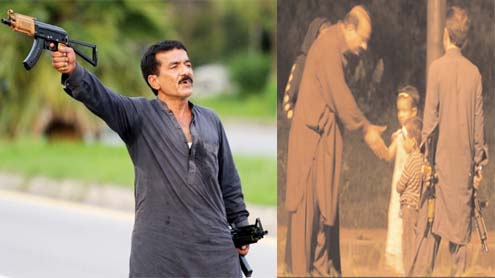 ISLAMABAD: The drama involving an armed lunatic and the apparently untrained police – staged in the high-security Red Zone of Islamabad – ended after almost six hours with the arrest of the man, who had been demanding implementation of an Islamic system in Pakistan.

The man, along with his wife and two children, had reportedly drove into the Red Zone, breaching all barriers leading to the area.Pakistan People’s Party (PPP) leader Zamurd Khan’s role was pivotal in the capture of the gunman, who tried to disarm him and got injured in the attempt. The armed man, who had fired at least five random shots at the Constitution Avenue, Islamabad, was finally arrested by security forces on the directives of Interior Minister Chaudhry Nisar, who had ordered the police to take him in alive. The police also took into custody the armed man’s children and wife.

The episode began with the man, identified as Sikandar, waded into the Red Zone in a car at around 5pm on Thursday and opened fire, putting a question mark on the capability of police and other law enforcement agencies to control the situation.Hit by surprise following the panic created by the ‘dangerous’ man dressed in black, police and Rangers cordoned off the area and barred enter for everyone. The police also rushed towards him and tried to convince him to lay down the arms. Sikandar, in no mood of negotiating with ‘junior cops’, asked for police high-ups to come in for talks. When they did, he made a demand that stunned all those around –establishment of Shariah in Pakistan.

Many senior police officials, including SSP (Operations) Dr Rizwan, and renowned politician Nabeel Gabool were also present at the scene to control the situation and persuade the man to surrender peacefully, but he refused to give up. Dr Rizwan said that the man was carrying two automatic weapons – a Kalashnikov rifle and an SMG.“I want safe passage and Islamic rule in the country,” the man demanded. “As our country is an Islamic republic, we want Shariah imposed in Pakistan,” he said in a telephonic call to a private news channel. “I am against vulgarity and immorality. My associates have taken up positions in the whole of Pakistan,” he said

After more than six hours of the drama, politician Zamurd Khan stepped in for negotiations. He approached the family, shook hands with the children, and suddenly tried to grab Sikandar. The man freed himself and opened fire on the politician, who managed to take the children away from the line of fire. The police then finally acted swiftly and got hold of the armed man, who was also injured in the attempt.

“Police said they were trying to tackle the situation with utmost care, as the gunman was apparently using the woman and two children as shields. But we succeeded in arresting him alive,” said Dr Rizawan while talking to the media at the climax. “The woman named Kanwal, who claims that the armed man was her husband, said she had no idea what he was up to.”There were reports that Sikandar’s first wife lives in the UAE and has a son, who is in the custody of the Emirates police on murder charges. – DailyTimes