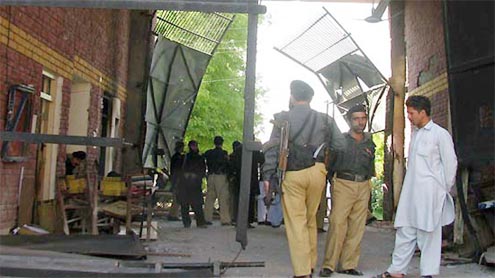 Militants were still locked in gunfight with police and security forces at the time of filing of this report and curfew had been imposed in the city, which is close to the lawless tribal regions bordering Afghanistan.“Militants have attacked the Central Prison. They are heavily armed and firing mortar shells,” district police chief Sohail Khalid said. DIG Prisoners Khalid Abbas said that as many as 5,000 prisoners, including 250 belonging to banned outfits were held in the jail.

The ambush appears to be an attempt to free several militants who are held in the jail, said a security official on the condition of anonymity. Residents in Dera Ismail Khan reported hearing loud blasts and gunfire, and said the electricity supply to several parts of the city had been suspended.Some officials claimed that the attackers had failed to break in the jail but some independent sources said that eight to 10 terrorists entered the jail after blasting the main gate and some 40 prisoners had fled the jail during the fighting. The sources said that gun shots and more than eight huge explosions were also heard from inside the prison. They said militants were targeting police vehicles with hand grenades.

A TV channel reporter said the terrorists, wearing police uniforms, occupied a house near the jail and some of them entered the jail. He said a DSP and his gunmen were seriously injured when terrorist threw hand grenades at a police van. Terrorists crossed the first police picket after a suicide attack and broke into the jail after blasting its main gate.The gunmen launched their attack with a series of heavy explosions before firing rocket propelled grenades and machineguns, district police chief said.

Contingents of Army and security agencies had surrounded the jail and started operation against the terrorists. Official sources said that six suspects were arrested from the battle area while two personnel were injured.Tehrik-e-Taliban claimed responsibility for the attack, claiming that more 100 of their fighters were participating in it. The attack is largest after Bannu Jail breakout in which hundreds of militants were got released by the Taliban insurgents. They included Adnan Rasheed – a key Taliban figure involved in a life attempt on former military ruler Gen (r) Pervez Musharraf.

The prison, in the central town of Dera Ismail Khan, houses Taliban and militants from banned sectarian groups. Some prisoners belonging to banned outfits and terrorist groups were on a hunger strike after a conflict with the jail authorities over possession of mobile phones. The jail authorities had been issued warnings by the terrorists of attacks for the last three days. – Nation

Crisis around the presidential election